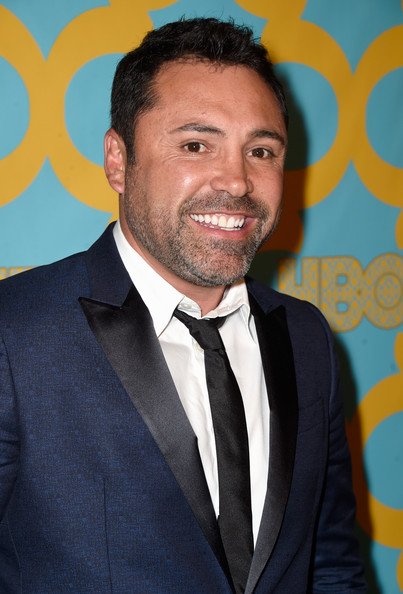 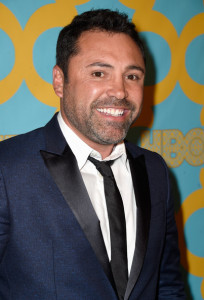 Golden Boy Promotions founder Oscar De La Hoya was suited and smiling alongside WBC President Mauricio Sulaiman for the hordes of surrounding journalists eager to pluck soundbites out of the air at a recent press conference.

Golden Boy’s star asset Saul ‘Canelo’ Alvarez (45-1-1, 32 KO’s) will be challenging Miguel Cotto (40-4, 33 KO’s) for his WBC World middleweight title on November 21st, and so naturally the initial conversation revolved around that.

FightHubTV’s cameras saw De La Hoya relaying the enthusiasm Canelo has displayed in private to him, saying the young Mexican is looking for a definitive victory over the older Puerto Rican champion.

“He cannot wait, he wishes the fight was tomorrow.”

“He wants to knock him out; that’s what he wants to do. He wants to win, and he says ‘I will do whatever it takes to win this fight,’ and I believe him.”

Canelo appears to have grown in confidence and stature since his single career loss to Floyd Mayweather Jr two years ago, and by accepting and winning a fight against Cuban southpaw Erislandy Lara last July, he has garnered a reputation for willing taking on tough assignments.

In November, he will battle a revived veteran thriving under the tutelage of trainer Freddie Roach, in what will be by no means an easy fight to win. But let’s say he does capture a second world title. In that scenario, he could well be in for a more daunting task somewhere in the near future.

Due east the WBA’s 160 lb. territory is ruled by the iron fist of it’s Kazakh Super champion Gennady Golovkin (33-0, 30 KO’s), who also happens to hold the WBC’s interim title. That title qualifies Golovkin as the mandatory challenger for the genuine article that will be contested between Cotto and Canelo in a few months time. He has been the mandatory challenger for a while but reportedly accepted ‘step-aside’ money to allow their fight to happen for the fistic and financial benefit of all involved.

But still in the darkness he waits, and the time is drawing near for him to stake his claim with authority if he wishes to achieve his oft-repeated goal of unifying the middleweight division.

Golovkin has his own title defence to make on October 17th against a very dangerous puncher in Montreal’s David Lemieux. Many view it as the most competitive bout of his reign so far. Provided he comes through that, the next step must be to chase the famous green belt of the WBC.

As the man who decides who Canelo faces, De La Hoya was asked whether in the case of victory for his man, he would ‘comply’ and allow Canelo to face the winner of Golovkin-Lemieux, who would then stand as his mandatory challenger.

He was decidedly less forthright than when answering previous questions.

“We obviously have to see what’s going to happen in the ring. What if there’s a draw? What if it’s such a great fight the fans demand another fight? What if there’s a trilogy? You never know what’s gonna happen but we obviously respect the best organisation in the world today, and that’s the WBC, and so we would have to sit down and discuss every possibility, every scenario that can take place on November 21st.”

With a swift turn he was away from the ghastly man who posed such an uncomfortable, but necessary question: will we see Canelo accept yet another taxing, required challenge, or will we be made to wait another year or more for the fight to build and Golovkin to deteriorate?

Golovkin’s resume has so far been bereft of that signature fight that if won, would establish him as the unquestioned king of the class. Canelo would fit the bill, but it appears De La Hoya is pushing that unsavoury morsel into his cheeks to gnaw at another day.

It seems unlikely he would allow his flagship performer to be stripped of his new belt instead of taking on Golovkin, as the rules require. That would be the perfect move to undermine Canelo’s credibility, something Mexican fans, in particular, will be displeased with.

But as we have seen countless times before arrangements can be made to stall out these kind of situations; a handshake here, a payment there, and everybody gets what they want. De La Hoya’s chummy relationship with Mauricio Sulaiman certainly won’t scupper any plans he may make.