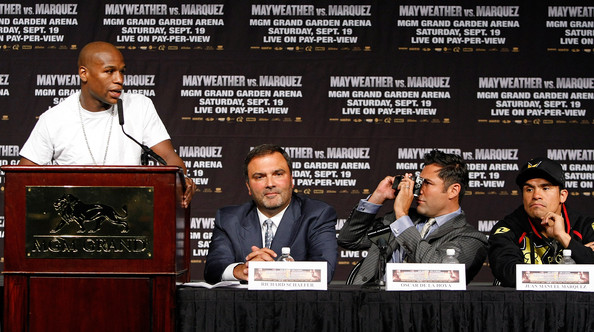 If you haven’t already read, seen, or heard, the biggest US boxing promotional company, Golden Boy Promotions might be going through a rift. One on side there is Oscar De La Hoya, the face and majority shareholder and on the other is his CEO, Richard Schaefer. A lot of industry insiders have said that there may be a breaking point a few months out and little by little its coming to fruition.

De La Hoya who was merely seen as the figurehead of the company with Schaefer running the show has become more visible to what people are stating as taking back his company. De La Hoya was out promoting the Canelo-Lara event in New York where his most important client, Canelo is going to headline his second pay-per-view with his most difficult opponent since Floyd Mayweather.

De La Hoya commented on the rifts and rumors on Schaefer and Golden Boy.

“We talk. We talk the other day. We’re working things out. This is a company that I started. Richard has been very instrumental. I appreciate what he has done and what he is doing but things will be worked out,” explained De La Hoya.

Regardless of the outcome, De La Hoya feels that Golden Boy knows what theyare  doing and the proof is already there.

“Look at what we’ve done in such a short period of time. We’ve generated the highest and biggest revenues. We sold the most pay-per-views which was 2.5 million. We keep filling arenas. We know how to promote. We just need more fighters that we can promote.”

That’s an interesting statement by De La Hoya because there are certain fighters that have appeared Golden Boy Shows and on Showtime with no contracts with Golden Boy but with Al Haymon. That is another indication of the rift becoming realer and realer.

The question was posed to De La Hoya if there was any bitterness towards that comment especially since he was part of the reason Mayweather has become this major brand in the world. De La Hoya responded by saying,” No of course not. We have no contract with Floyd and he can do whatever he wants to do. But Golden Boy Promotions has promoted his last 8 fights I believe. I appreciate that he chose my company Golden Boy to help promote his fights. It’s a pleasure and an honor. He could have chosen anybody else.”