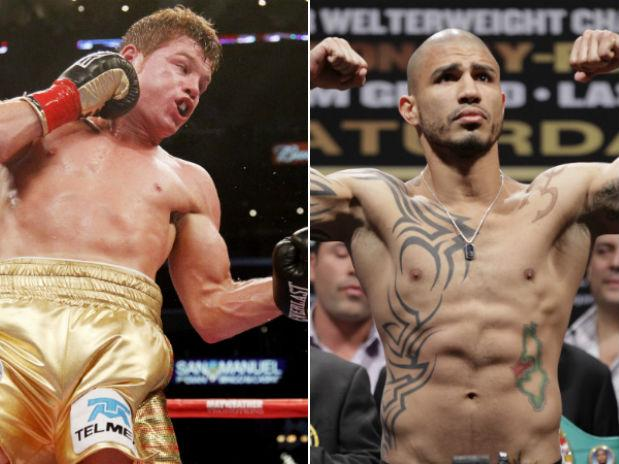 More visible over the last two weeks, Oscar De La Hoya was on hand at the press conference in New York to kick off Honor and Glory: Canelo-Lara. It’s been noted that De La Hoya had been in conversations with Bob Arum over the past two weeks and little by little is sounding Arumesque in his promotions of the fight.

Keeping his best promotional hat on, De La Hoya feels that this bout will have action because of the style clashes.

“Lara’s not just a boxer. He does like to engage. He does have speed. I don’t think he has more power than Canelo but he believes in his power. He has courage and he’ll stay in there with you. He’ll get hit once to land two,” stated De La Hoya. “Canelo can hit and he’s strong. I think the fact that he boxed Trout and went up against Mayweather and got a taste of the slippery style, he’ll be ready for Lara’s style. He wants to go in there and prove to the world that I’m not scared of anyone.”

Canelo has done well as the A-side of his 1st pay-per-view with Alfredo Angulo with a buy rate of 350,000. This will be his second pay-per-view with Lara. Should he win, he will likely return in November for a third pay-per-view. With the limited amount of fighters that can be on pay-per-view, one wonders who that opponent could.

Enter in Miguel Cotto, who also has a pay-per-view fight lined up next month against Sergio Martinez. Cotto was once a potential foe for Canelo but chose to chase history in attempting to become the 1st Puerto Rican to win a world title in 4 different weight classes. De La Hoya feels that Cotto is still a big fight t make against Canelo, win or lose.

“Absolutely,” stated De la Hoya. “Canelo is in such a great position. Even if Cotto wins, we have a huge fight. Let’s say Cotto loses, he was fighting at 160, he doesn’t belong there. He can come back down to 154 and fight Canelo.”

However, there are rumblings that Canelo isn’t going to be a 154lber for long and with this fight with Lara being at 155 lbs, the skeptics seem to believe that is also an indication of Canelo’s weight struggles and a move to middleweight might come sooner than letter. De La Hoya disagrees.

“I think he’s (Canelo) made a few adjustments on his diet. He’s going to stay at 154 for now. Eventually in a couple of years he can move up, but I see him at 154 for a couple of more fights.”

Quite possible one of those last fights at 154 will be a rematch against Mayweather but De La Hoya hopes Canelo is patient on the rematch.

“Certainly, a rematch is possible. I would love to hold him back for another 1 or 2 years, if Mayweather is still around, absolutely rematch.”