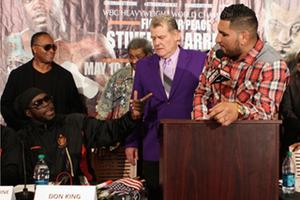 All across America finals week for college students is the most important of the year with summer right around the corner so they can recharge the batteries and earn money to do it all over again in the fall. A final test of sorts will take place this Saturday Night from the Galen Center on the USC Campus, were history will be made barring a draw.

Not only will the winner be the first of its kind it could also spark an American heavyweight scene that hasn’t been hot in over a decade. Will Stiverne prevail with precious punching as he did in their first meeting? Or will a more focused Arreola steal the show finally live up to his true potential?

Everyone knows the most powerful four letters in sports is ESPN. The network is rumored to be interested in investing in the sport beyond ESPN2 Friday Night Fights. They managed to outbid both premium channels to secure the rights for his fight. They may have picked the perfect time to dip their feet in the pool and this matchup which is affordable with a decent chance of a nice payoff in the near future.

Life is all about timing much like the sport of boxing. In the first fight Arreola rushed his way inside taking control of the pace until a perfectly time punch dropped him in the third round consequently breaking his nose and changing the fight.

Bermane Stiverne will no doubt try to emulate the things that allowed him to be successive in their first encounter. Mostly by utilizing his skill set with a jab, reach, defense, and counter punching with overhand or straight right hands.

In the latter stages of the second round Stiverne began to move just enough opening up an angle for his counter right. He kept his jab in Arreola’s face while circling away from that big right hand in the third. Arreola tried to take the momentum back in that same round until he walked right into Bermane’s flush right hand resulting in a knockdown and even worse a broken nose.

Arreola tried to keep the pressure on Stiverne with limited success, unable to sustain his offensive attack. The rest of the fight Stiverne used his jab, left hooks, and those potent counter rights over the top of Arreola’s punches to cruise to a dominant victory.

It was clear that the injury affected Cristobal’s game plan yet his still showed the heart to finish on his feet, every once in a while he would win an exchange.

When one key, one car is a fighter’s motto that explains just how low the bar is set for Arroela from his past transgressions in training camp. I wonder while training does Arreola’s team yell “one car” after he yells “one key” the way the Money team replies to Floyd Mayweather?

He and his trainer Henry Ramirez, have sound like a broken record in every interview and presser for the last 3-4 years stating what weight he will show up in only to come out of shape. The recent Teddy Atlas interview was by far the most telling piece of information on how far he has fallen from a title shot in front of a sold out Staples Center not long ago.

Setting the past and all jokes aside, Arreola does seem to be glowing with confidence these days on again telling anyone who will listen he is a changed man and how much it means to do it for his family. Stiverne will come in with confidence after a solid performance. The question is can he build on that victory and improve in the rematch.
Generally speaking, once a counter puncher figures out a come forward fighters tendencies it’s usually a wrap. One would assume the second fight will be more competitive throughout with a focused and less hesitant Arreola.

Based on what I saw early and at times later in the fight, Arreola should be able apply the kind of pressure that could give Stiverne trouble. If Chris throws his jab with authority while staying busy landing not just up top, but to the body as well, he could make this a real barn burner something rare in today’s heavyweight division.
Stiverne needs to rinse and repeat what he did in the first act maintaining a good defense yet staying active on offense. Two things I would change would be a more meaningful jab and a higher guard or at least keep his left hand higher.
The style of these two prize fighters should create a more compelling contest the second time around. With Mexican and Haitian pride one the line this won’t be just a run of the mill title for the Victor. History and chance to bring a heavyweight belt back to the states has to be on the minds of both combatants.
Look for Stiverne to jump out with the early lead until Arreola is able to close the gap and take this fight to the ropes, where he will then be able to land in combination. Heavy blows to the head and body will breakdown Stiverne’s defense exposing him to brutal shots that will quiet his offense.

This two-way fight will have its healthy share of exchanges with both men successfully applying their strategy. I wouldn’t be surprised to see either or both guys hurt in different stages of the fight.

I don’t know how long this “new” Arreola will be focused, but believe he is in a good place to pull off this victory. His chin will help withstand the punishment and the work put in it should allow Arreola to be more patient instead of looking to land one big home run KO.

My official prediction is Cristobal Arreola by T.K.O. or Majority Decision.