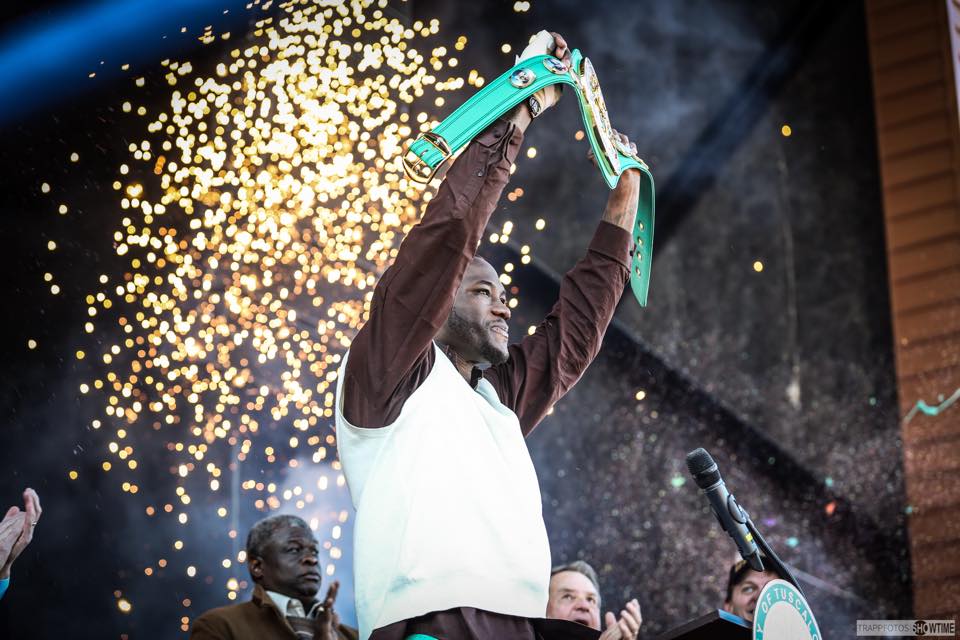 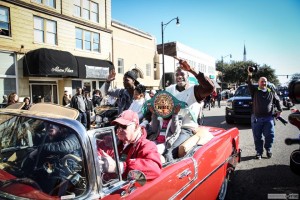 This is part one of a two-part article of when I had a chance recently to speak with the WBC World Heavyweight Champion Deontay Wilder.
We were able to talk about several topics that included how his hand is progressing, how it felt to win the world heavyweight belt, and his long time Twitter rival Tyson Fury.

The 29-year-old Wilder is 33-0 with 32 KOs. He is coming off his only fight that lasted past four rounds, but it was probably his most impressive and definitely most important fight as he beat Bermane Stiverne to win the Heavyweight Championship. During that fight, Wilder fractured his right hand in the 3rd or 4th round. He said it is currently about 70-80 percent right now, and he feels great and can’t wait to get back in the ring.

I asked Wilder what it meant to finally fulfill his dream of becoming the heavyweight champion and how did it feel that he is now the 1st American to win the heavyweight belt since Lamon Brewster in 2006. Wilder responded:

“It means a lot. First and foremost, I brought it back home on Muhammad Ali’s birthday, and that’s my all-time favorite fighter, so it means a lot to me. It does my heart good. It warms my heart. It feels good. It’s something that I accomplished, and nobody can take it away from me. But, on the other hand, my heart is still hungry. Even though I’m the heavyweight champion of the world, I’m still hungry. I’m ready for more. I know there’s more to gain in the heavyweight division. I want people that when they say the word ‘Boxing’ the 1st thing they think of is Deontay Wilder. So I know there’s still a lot of work to be done, and nothing is going to be given to me, but I don’t want anything given to me.”

I then asked Wilder about the extra use of the jab in the Stiverne bout, as well as the people who were so surprised by his performance that night. Wilder said:

“It’s something that I’m going to plan to use now, but I adapt to my opponent. I wanted to make a statement with this fight. We know what we can do. We’ve been saying it for years. I know I can throw the jab, the right-hand hook. I can box, but I really didn’t have to, and I’m not going to waste any energy trying to do something that I don’t have to. The job is to make it easy. This is something you can’t say I play. This is a dangerous business. So I try to get in and get out, but with Stiverne it was a totally different thing. I didn’t like him, we had bad blood, and I wanted to really hurt him. I said I was going to beat him to an inch of his life, and I did. People thought I was a four rounder fighter, but that’s disrespectful. I bust my butt for four months in the camp. I’m a professional, and I take it seriously.”

One of the main verbal rivals to Wilder is UK fighter Tyson Fury. The two have gone back and forth on twitter throwing verbal jabs at each other for years. They even had small negotiations of a fight a year or so ago which fell through the cracks very fast and nothing was rekindled from there. It’s a fight that a lot of people both in the US and the UK would love to see, so I asked Wilder what would be his thoughts on a possible Fury fight. Wilder replied:

“I would love to fight with Tyson Fury. I already talked to my team about that, but his people don’t want this fight, all of them on Klitschko. First Jennings was my mandatory, he ran to Klitschko, now it’s Fury. I want Fury because I’m tired of his three years of talking. If this was a street fight, there wouldn’t be no talking. Being that this is boxing, we have to talk, but eventually there comes a time when you have to backup what we talk about.

And now is the time I want to backup what I was talking about, he don’t want to do that, he want to go after Klitschko just for the simple fact that he’s getting old, and he wants to try to take advantage of that, nobody wants a young bull. I want him bad, and I wouldn’t mind going to England for that fight. I got a lot of fans in England so I wouldn’t mind fighting over there. But if he loses to Klitschko, and they seem like they want to hold out for Klitschko if he fight Klitschko and lose, I don’t think I’ll be interested anymore.”

Tomorrow will be part two of the article where Deontay Wilder will talk about a possible Klitschko fight, a possible David Haye fight, his impressions of Wladimir Klitschko vs. Bryant Jennings on April 25th, and when and where he plans to get back into the ring.