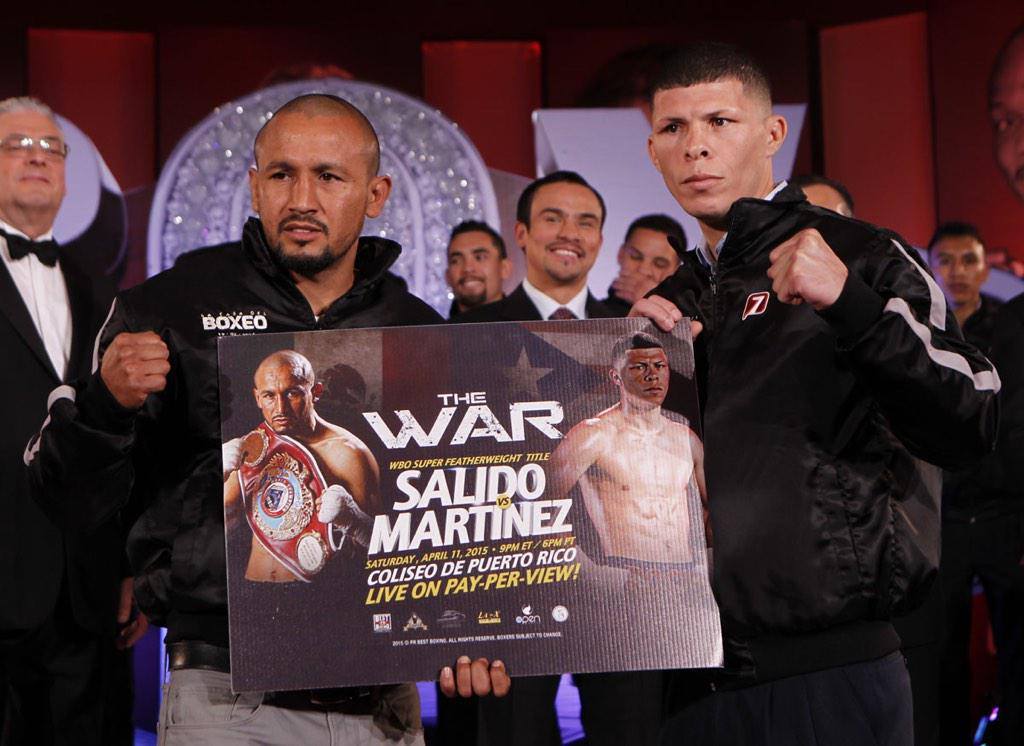 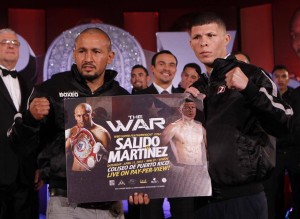 Two warriors of the countries with most boxing tradition faces this Saturday, April 11, when the Mexican Orlando “Siri” Salido defends his World Boxing Organization (WBO) junior lightweight belt against former two time world champion Roman “Rocky” Martinez, from Puerto Rico, in “The War”, that will be held at the Coliseo de Puerto Rico Jose Miguel Agrelot in San Juan, Puerto Rico, in a presentation of PR Best Boxing Promotions (PRBBP) in association with Promociones Zanfer and will be broadcast on Pay Per View in Puerto Rico, United States and Canada for all Cable TV and Satellite systems.

The Salido-Martínez clash mark a new chapter in the world battles between Mexico and Puerto Rico, well-known in world boxing history and also this is the return of world boxing at Coliseo de Puerto Rico, which had as its most recent show on July, 2010, when Juan Manuel “Juanma” Lopez beat the Filipino Bernabe Concepcion with a second round KO.

“Again a Mexican and Puerto Rican faces for a world title and we have the opportunity to bring this great battle to all the fans of the world. But it is not just a Mexican and Puerto Rican, is a Mexican, two-time world champion in the 126 and 130 pounds, Siri Salido, and a Puerto Rican, twice a champion at 130 pounds, Rocky Martinez. Also, both Salido and Rocky are two known worldwide for being warriors in the ring, so we expect a real war this Saturday,” said promoter Ivan Rivera, president of PRBBP. “We are back to the big stage in the Island, the Coliseo de Puerto Rico, with another big event, we know that the Puerto Rican fans will enjoy here, and the world through television on Pay Per View.”

The main event feature Siri Salido (42-12-2, 29 KOs) vs. Martinez (28-2-2, 17 KOs) in the first defense of the title Salido won in September 2014 when he defeated Terdsak Kokietgym by TKO in 11 rounds. In that fight, Salido went to the canvas three times, and Kokietgym was down four times.

“We are ready for a war. We know Rocky Martinez and I know he is a strong fighter who comes forward, so I expect a hard fight on Saturday,” Salido said. “Here in Puerto Rico I won two great fights (against Juanma Lopez), and fans has been very good to me, so I am comfortable and focused on this fight.”

Salido, a native of Ciudad Obregon, Sonora, Mexico, is unbeaten against Puerto Rican boxers. The veteran fighter has faced four Puerto Rican fighters, with five victories over them. In 2002, a young Salido won a decision over then veteran Carlos “Topo” Gerena in Texas, in 2004 Salido came to Puerto Rico to defeated Omar Adorno by knockout in four rounds, in 2011 and 2012, again in Puerto Rico, Salido beat Juanma Lopez by TKO in eight rounds and KO in 10 rounds, respectively, while in 2013 he defeated Orlando Cruz by KO in Las Vegas.

While Martinez (28-2-2, 17 KOs) will attempt to be crowned for the first time in Puerto Rico, as his other two belts were won by a technical knockout in four rounds over then monarch Nicky Cook in the United Kingdom in 2009 and a split decision victory over Mexican Miguel Beltran Jr. in Las Vegas in 2012. In his most recent bout, Martinez won by a second rounds knockout over Herbert Quartey on December 20, 2014.

“I am in great condition, as never in my career. Salido is a strong opponent, who comes to fight, so I have to be in top condition, as I know I am,” Martinez said. “And for me there is an extra motivation, first to fight again in Puerto Rico but most important to win the world title in my country.”

Gonzalez, 31, is coming off a TKO win in two rounds over Antonio Joao Bento last December 20, 2014, to earn the WBO Latino belt. The victory over Bento was after a year and a half of inactivity after his only defeat in May 2013 when he lost to then WBO lightweight champion Ricky Burns after a wrist injury not allowed him to continue for the tenth round.

Meanwhile, Quintero wins by a second round TKO in his most recent bout over Carlos Mario Sanchez on September 27, 2014. Like Gonzalez, Quintero has a loss in his world title opportunity, a split decision defeat against the International Federation of Boxing (FIB) champion Miguel “Titere” Vazquez in 2012.

In another co-main fight, the flyweight world contender McWilliams Arroyo (15-2, 13 KOs) is going to face Mexican Ismael “Sapito” Garnica (13-6-1, 5 KOs) in a scheduled 10 rounds fight on the flyweight division.
Arroyo, who is ranked #11 by the WBO and #5 by the International Boxing Federation (IBF) at 112 pounds, comes from a close split decision loss last September 10, 2014 in Thailand against IBF flyweight champion Amnat Ruenroeng. The 2008 Puerto Rican Olympian was a gold medalist at the 2006 Central American and Caribbean Games in Colombia, at the 2007 Pan American Games in Brazil and at the 2009 World Amateur Boxing Championships in Italy.