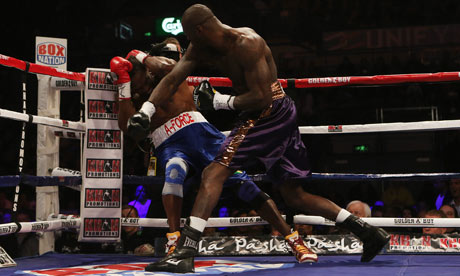 Last week one of the rising young American Heavyweights joined ThaBoxingVoice podcast. “The Bronze Bomber”, and KO artist, Deontay Wilder came on to share his view on numerous topics including his slow climb of the heavyweight division, his opinion on some upcoming heavyweight fights, as well as various other boxing topics. The 27 year old from Tuscaloosa, Alabama, who is 28-0 with 28 KOs, the only man to ever do that to start his career, also talked about his upcoming opponent this week on Friday, Siarhei Liakhovich (25-5 with 16 KOs).

Wilder, who fights in California on Friday, said that Liakhovich was the opponent he wanted, stating, “He’s a tough guy, he got good skills and he’s known for going rounds, that’s what we want right now.” We then asked about fighting on the Bernard Hopkins Oct 19th card since he was supposed to be on his card July 19th before that card getting canceled, Wilder responded, “I was labeled as 1 of the busiest heavyweights in the world and I want to keep that title, but right now it’s Aug the 9th, I can’t look past this man.”

We then moved on to his thoughts on the heavyweight landscape. “The Heavyweight division is definitely coming back, the American heavyweights, it’s just a different landscape overseas. There can be 2 no names and they will pack the place.” Then we asked if he would like to fight the winner of Seth Mitchell and Chris Arreola, Wilder then said, “At the end of the day, only 1 person can have those belts, and 1 undisputed heavyweight champ. Whatever my advisors feel is the best fight for me, that is what I’m going to do. I just want everyone on the same page. Everyone has the same vision. Everyone has the same goals. It’s my time. We just want to bring these belts back to America.”

Wilder did mention that he got impatient with different things that were going on, “But that’s one of the hardest things as a human, is to be patient”, said Wilder. We asked if he thought that outside the ring issues, like the incident in Las Vegas, was going to block him from becoming the Heavyweight Champion of the World. Wilder responded, “I feel like a person like me, when you meet me in person, I’m the same person, 5 years, 10 years from now, I’m the same Southern guy. Unfortunately in our society, good isn’t entertainment, everyone wants to hear the bad, but everything in my situation will be okay.”

We then asked him on his pick for the Mitchell-Arreola fight, and even though he didn’t give a clear pick, he did have some comments on it after we followed up with a question about his feelings on if either one was getting “cashed out”.  Wilder stated, “I had dinner with a couple guys recently and they laid it out that same way, and the way it was put, it kind of sounds like they would be cashing Seth out, pretty much saying, it’s time to sink or float. I know Seth, he’s a great guy. Arreola can kind of get mouthy at times. People would more go towards Seth personality. I’m not big fans of either guy, but I’d probably go with Seth.”

We then moved onto see his pick with Tony Thompson vs. Kubrat Pulev in Germany, Wilder had some comments on that. He said, “Tony definitely got his confidence back. He’s on his all-time high in terms of confidence. He likes to travel so going overseas won’t bother him. He’s the taller guy and has longer arms, and he’s still skillful. I got to go with my countrymen and hope he can pull it off.”

Lastly, in regards to possibly not getting the right decision by going overseas and possible having bad judging, Wilder simply stated, “This is tremendous power that I have and I’m going to try to display it each and every time.”