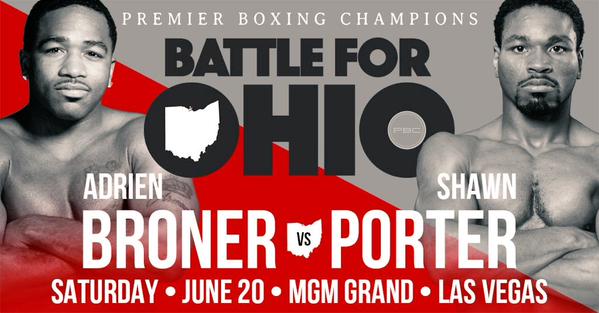 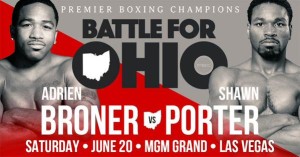 Many found it odd that a fight between Shawn Porter and Adrian Broner, a fight dubbed: The Battle for Ohio, is being fought in Las Vegas at the MGM Grand when both fighters are from the Ohio area. Porter is from Akron and Broner is from Cincinnati, although they have totaled two fights fought in Ohio in their last 20 fights combined.

Residents in the Ohio area were upset, rightfully so, because they don’t get many big fights. Now that a big fight makes sense in that area it is getting shipped off to the same city that enjoys most major bouts.

I can understand that level of concern, but I also understand the importance of this fight and why it makes sense in Vegas. The bottom line is both fighters are willing and happy to fight inside the Vegas city limits.

“This is the fight capitol of the world. I’m glad that the fight is happening out here. My dad and I have been out here for a couple of years now. If I fight in Ohio I don’t want to fight anywhere but Cleveland and I know the same goes for him. It’s happening where it’s supposed to happen, here at the MGM Grand,” Shawn Porter told Thaboxingvocie.com.

Porter left the possibility open for a potential fight in Ohio one day, so long as it’s Cleveland. However, this is Porter’s biggest fight and he wants his marquee matchup to have the same fixtures associated with it as other big fights throughout the boxing’s past.

It is a fair point, even if it is disappointing for Ohio residents. But Broner represents Porter’s first limelight exposure. You could argue that Porter’s fight with Kell Brook was a big fight, and it was, but Porter recognizes the difference between both fighters’ commercial appeal. A win over Broner would completely placate his loss to Brook.

“It’s a bigger profile fight for me. Kell Brook coming over here, not too many people in the States were aware of who he was. Everyone in the world knows Adrien Broner, they’ve seen everything he’s done, both in and out of the ring. We’re both at the highlight of our careers right now. We’re both as healthy as can be, young and energetic as a fight fan would want us to be. I know I have everything and more than he has to win this fight.”