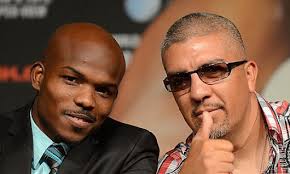 Former WBO Welterweight Champion Timothy Bradley is scheduled to make his return to the ring against the hardnosed Argentinian Diego Chaves on December 13th at The Cosmopolitan in Las Vegas; the 12 round welterweight bout will serve as the main event for an HBO broadcast.

Bradley has not fought since April of this year and he will try to get back into the win column against Chaves after suffering his first career loss to Manny Pacquiao in the rematch of their 2012 bout.

Chaves is considered a dangerous opponent and is known for giving fighters tough fights. But this won’t be the first time Bradley has jumped into a tough fight with a rough customer after a previously difficult outing.

After receiving heavy backlash stemming from his first fight with Pacquiao — a fight most believe Bradley deserved to lose despite winning by split decision — Bradley signed up to fight Ruslan Provodnikov and the two engaged in one of 2012’s best fights. The fight took a lot out of Bradley, but it went a long way in gaining back some of the credibility he unrightfully lost with fans that ignorantly blamed him for a decision he had nothing to do with.

Now, Bradley is coming back with that same chip on his shoulder and he deserves all the credit in the world, especially after considering the overwhelming percentage of fighters throughout history who have taken soft touches after suffering their first loss.

Chaves is also coming off of a loss. His loss came by way of DQ in a dirty, and sometimes difficult to watch, outing against Brandon Rios back in August on HBO. Chaves, who was up on the scorecards at the time of the DQ, was blamed for the bulk of the dirty tactics, but he wasn’t the only one committing infractions that night. Rios shared some of the blame for the fight getting out of control, but in the end it was Chaves that suffered the loss.

Chaves’ only other loss came against highly touted welterweight contender Keith Thurman. The bout between Chaves and Thurman took place in July of 2013 and most assumed it would be another notch to add to the Thurman highlight reel. It ended up being just that for Thurman, but it was a longer night than expected as Chaves fought tough for 8 rounds before being KO’ed in the 10th.

Chaves is definitely in that Mauricio Herrera category, but the biggest issue for Bradley is even if he wins it could be difficult to look good or even escape unscathed, which is a bigger issue when considering the fact that Bradley has already taken some pretty severe head damage – namely in the fight with Provodnikov.

Joel Diaz, Bradley’s trainer, knows the threat that Chaves presents and considers him a difficult challenge for various reasons. Diaz knows that Bradley’s in-ring superiority and likelihood for victory don’t negate the problematic nature of a fight with Chaves.

Diaz is familiar with Chaves, specifically with his recent body of work against the previously mentioned Thurman and Rios.

“Diego Chaves is a tough fighter and a tough opponent. [I knew it] ever since I saw him in Texas when he fought Keith Thurman, but I always knew he is a tough fighter. He was doing really good against Keith and then Keith caught him with a shot to the body and then finished him off with that devastating right hand,” Diaz said.

Diaz won’t make the mistake of underestimating Chaves. In fact, Diaz isn’t blinded by the DQ loss to Rios and he knows how effective Chaves was in that fight. More so, Diaz knows that Chaves’ performance was undervalued by the notion that he was the dirtier fighter of the two that night. Diaz saw things differently and believes the dirty tactics were more mutual than the referee would have us believe.

“Coming into the fight with Brandon Rios, I think it was a little bit of both ways and they were both getting rough. The fight was not getting pretty as the rounds went by and I think in my opinion the ref was just bored of dealing with that fight and so he just went ahead and stopped it.

“But I think towards the later rounds he should’ve just let it go. It was a little rough on both ends, but at the end Rios won by disqualification, I just think Chaves is a tough kid with a lot of confidence who comes to fight.”