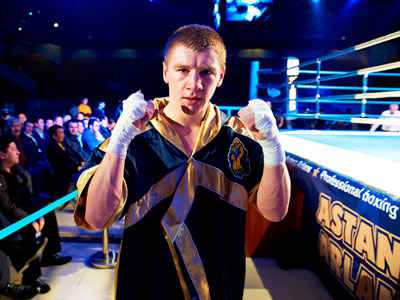 New York, NY(3/27/14) – DiBella Entertainment (DBE) has announced the signing of amateur standout Ivan Golub to an exclusive co-promotional agreement with Fight Promotions, Inc.  Golub, a 25-year-old Ukraine-native, had an astounding amateur career, which saw him become a five-time Ukrainian National champion, win a bronze medal at the Junior World Championships in 2006 and bronze at the World Championships in 2009, amassing a record of 270-32 in the process.  Golub has also competed in the World Series of Boxing, winning all five of his bouts. Living and training in Brooklyn, NY, Golub is now ready to take the professional ranks by storm, debuting in the middleweight division, and is confident DBE can put him on that path.

“I always dreamed of boxing in the US. The US is the Mecca of boxing and if you want to be the best, you have to train and fight here.  I am ready to put in all of the hard work and dedication it takes to become the next great middleweight champion of the world, and I know that Lou DiBella (President of DiBella Entertainment) is the man who can get me there,” stated Golub.

“We are happy and very excited to have signed Ivan with Fight Promotions, Inc.  Ivan is one of the premier boxers in his country and had an absolutely stellar amateur career.  We see a very bright future for Ivan and given his vast amateur experience, we see him quickly moving up the ranks of the middleweight division,” said promoter Lou DiBella.

Manager Rory Donadio added, “We are very excited to manage this blue-chip prospect in the middleweight division.  Ivan is an exciting, brawling southpaw that will go straight to the top of the division.”

Look for an announcement on Golub’s debut to come very soon.