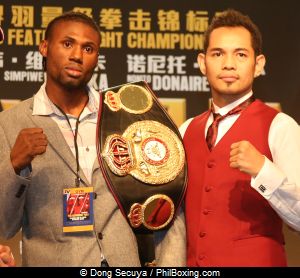 It’s rare we get a true 50/50 fight and on Saturday we get just that as Nonito Donaire takes on Nicholas Walters. It is not just the best fighting the best, it is also the youth versus experience as two of the best in their respective division battle for claim of being the division’s best. Donaire heads into the fight with questions of how much he trained and how focused he is on boxing at this point in his life? On the adverse side of things the world only knows Walters from one fight, a bout in which he destroyed Vic Darchinyan, meaning we really don’t know what Walters has, but we assumes since Donaire struggled against Darchinyan that he will give Donaire some troubles.

I do know from first hand accounts that Donaire entered training camp with Mike Bazzel in San Carlos, CA at the famed Undisputed Boxing Gym earlier than pundits like myself expected. Donaire touched down in the Bay Area at the end of July as he began his prep for this fight. Donaire also spent time working with his father at the Donaire Sr. Boxing Gym in Oakland, CA , but the big takeaway was the seriousness of the camp. I never really had an opportunity to talk directly to Donaire about all the details of the camp, the nuances of what is happening and what this fight means, but I took that more so as to how serious this fight meant to him and that the media took a backseat for this fight.

Enter Nicholas Walters, a man that media members explained as looking about 145 lbs on his media day workout on Wednesday. Walters is a man who has spent his career fighting on undercards and underrepresented, he is raw, but his power is so real that he can get away with it. It was a left hook that caught Darchinyan flush and he was unable to come back to his senses. At the media scrum Walters explained “I have seen him fight on different occasions, I like his style, speed and power, growing up I was a fan, [but] it’s my time.”

The sense for Walters after the media day was that he feels this is his star making performance and that big name fight will be second nature after this bout. “This time I put myself in the underdog position and that mentality. I trained hard, very, very hard” Donaire explained to Elie Seckbach in a video from the media scrum as he explained his mindset for the fight. It was a mindset that allowed Donaire to train hard and recreate hunger that may have been missing from prior camps.

“Records don’t mean [expletive] to me, there will be guys out there 50-0 with 50 knockouts, I will fight them.” Donaire explained when asked about Walters and his impressive record. The fight is a big one for the course of trajectories of both fighters as Donaire looks to regain his spot on the pound for pound top 10 list as Walters hopes to enter that conversation. Then there is the elephant in the room, Jhonny Gonzalez who recently stated via press release he wants Donaire in 2015, so essentially this fight could also see the winner fighting Gonzalez as well.

In essence, the best fight of the fall on paper has all the makings of being something that could leave a better taste in the mouth of boxing fans who have been burden with less then stellar fights this year.