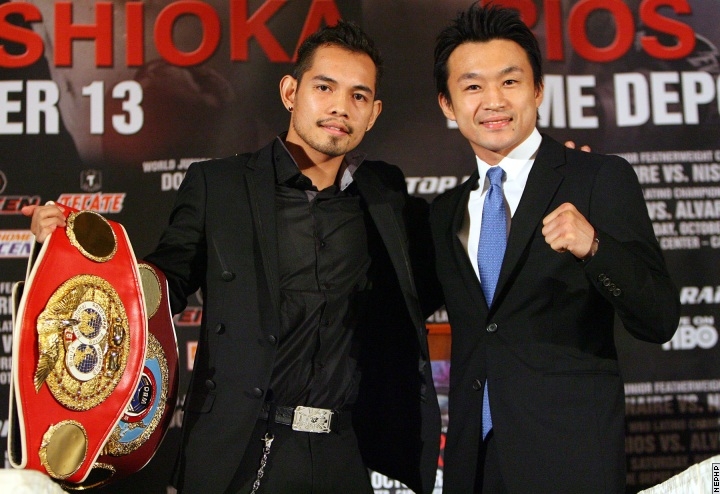 BOB ARUM: I am delighted to be on this call. Everybody that has any connection with boxing is excited about this card. The 122 lb. championship that will be defended by Nonito Donaire is going to be a classic. I had the opportunity to watch Toshiaki Nishioka when he fought Rafael Márquez and he is a terrific fighter and we know that Nonito is one of the great fighters in boxing but he’s going to have his hands full. I believe that his fight with Nishioka will be as exciting and as interesting as the co-feature with Brandon Rios and Mike Alvarado at The Home Depot Center. We have sold over 5,000 tickets and looking for a crowd of around 7,000 which will be a virtual sell-out.

CAMERON DUNKIN: This is a fight that Nonito has wanted for a very long time. Nishioka is a great fighter. This is the kind of fight that Nonito, who is one of the great fighters fighting today and also in history, these are the kinds of fights that you get excited about because this is really a historic fight.

ROBERT GARCIA: Nishioka is a great fighter and the best in the division. He is ranked as the best super bantamweight in the world. It’s going to be a really tough fight but Nonito has been training really hard and he has to come out and perform and do what he’s been doing so far.

NONITO DONAIRE: Training camp has been going excellent. We had our last sparring yesterday and we are mentally prepared and physically prepared for this big fight next weekend and we are going to put the game plan in the works and come out of this fight victorious.

What do you think about the fact Nishioka has not fought much recently?

NONITO DONAIRE: I think that being older and being a veteran their record is never as bad as it is. We have been training really hard for this fight – we don’t want to take any chances at all. I believe when we are at this level and at this age and even if he hasn’t fought in a while he can be very dangerous.

NONITO DONAIRE: We have been fighting the fights and getting the victories and I think that’s what counts most. These guys I have been fighting are world champions and they are at the top of their game. Sometimes you don’t get the results that people look for. People expect a lot from me. We have been trying to change things up to get different results. Against Nishioka we can’t let our guard down and going back to the old Nonito Donaire style of fighting smart.

Nishioka has not been stopped since his second pro fight in ’95 – how much would it mean to get the KO?

NONITO DONAIRE: When it comes it comes but the proper game plan will show my power which is what I was known for – lightning fast counters that were knocking people out because they never saw it coming. No matter how tough you are, if you don’t see where it’s coming from, you don’t expect it and it will knock you down.

ROBERT GARCIA: We all know when the guys move up in weight the punches get stronger and the opponents have all been world-class fighters so it is more difficult to get the KO. It won’t be easy against Nishioka but at the beginning of training camp Nonito told me he wanted to come in and do it the way he used to do it – picking them apart little by little then knocking them out. He’s been doing it in training against lightweights, super lightweights – he’s been landing beautiful punches and combinations and I have no doubt he will do it against Nishioka. I am not pushing or asking for the knockout but in training he has been doing the right thing and if he performs like he did in training I will be happy with him.

How do you think Nishioka will try to get the job done?

NONITO DONAIRE: One thing he will try to do is land the straight that is difficult to do against me. Aside from that, I haven’t seen any tape that he can do damage with. He did great against Márquez, but Márquez is a lot slower than me. A lot of those punches won’t land with me with power. But we are very worried and very mindful of that advantage he has.

How much is he being a southpaw a problem for you?

NONITO DONAIRE: It is not so bad. I have sparred with a lot of southpaws over the years. Darchinyan was a notable southpaw and I knocked him out. And Márquez was one of the guys I took apart as well when I did decide to turn it on. We are mindful he is a southpaw. I try to do the things that are difficult for me against a southpaw and that’s one thing we figured out.

How is the drug testing going?

NONITO DONAIRE: Pretty good. A couple of days ago they showed up at my door and took 4 tubes of blood – the last time they only took 2. You never know when they’ll come in. I really believe in it. It’s good for boxing – it’s random so you really can’t hide anything at all.

Do you think it has a future in boxing?

NONITO DONAIRE: I think it will and it should be a part of boxing. For me I do the things that I do for the fans and the love of the sport. The only thing that comes out of it is good – it will gain fans.

Where do you see yourself in a year from now?

NONITO DONAIRE: Moving up to 126 pounds is another option that we have. We are looking to stay at 122 for a bit but I can work my body to be ready for 126. There are fighters at 122 that I have not faced yet and they know who they are and I am fine with facing any of them.

ROBERT GARCIA: Yes, this guy is very experienced. He is one of those guys that has been there for so many years and has done everything with every type of opponent but inside the ring he has not been with a Nonito, who stings the way he stings and has the power that he has. He hasn’t seen that and that is going to be the difference. Nonito has the power and the speed and Nonito knows what punches are going to be coming.

NONITO DONAIRE: Nishioka has power and he knows how to set it up. He’s a veteran and knows the tricks that can frustrate a fighter – that’s what we don’t want to fall into. We have a great game plan and we are ready for whatever it is.

What about the Mathebula fight?

NONITO DONAIRE: We took it to him. We showed power. Even against a taller guy we showed we could out-speed him and get by his longer reach. We can bring that into this fight as well.

What do you think about the co-feature?

Would you want a fight against Abner Mares?

NONITO DONAIRE: I hope so, but that is up to the promoters, the networks and the fans. We are always willing to fight anybody.

BOB ARUM: Everybody who loves boxing come out to The Home Depot Center because they are going to see a card second to none.  Two great fights and a terrific undercard and tickets reasonably priced. Almost all of the tickets are sold except for the $35 tickets. So for $35 you can watch history.

NONITO DONAIRE: I want to thank everyone and let them know that this is very exciting for me. Thanks to Bob and Top Rank for making it happen. Rios-Alvarado is going to be an incredible, incredible fight and you don’t want to miss it. I know Nishioka will go all out and I will go all out. Excitement will be in the air on October 13.

Promoted by Top Rank®, in association with Teiken Promotions and Tecate, the Donaire vs. Nishioka / Rios vs. Alvarado championship doubleheader will take place Saturday, October 13 under the stars at The Home Depot Center in Carson, Calif.  Both fights will be televised Live on HBO®, beginning at 10 p.m. ET/PT.

These four gladiators boast a combined record of 131-5-4 (86 KOs) — a winning percentage of 94% with 2/3 of those victories coming by way of knockout.

Nishioka (39-4-3, 24 KOs), of Hyogo, Japan, boast an eight-year, 16-bout winning streak in his own right, including eight world title fights.

Rios (30-0-1, 21 KOs), the former WBA lightweight champion, from Oxnard, Calif., is on the hunt for his second world title in as many weight divisions. He enters this fight having won 10 of his previous 12 fights by knockout.