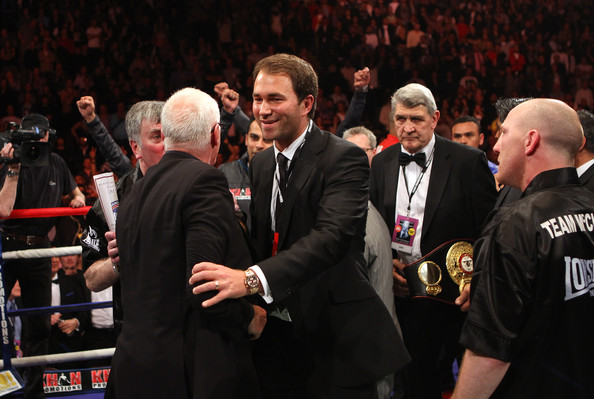 Eddie Hearn, managing director of Matchroom Sport, recently spoke to ThaBoxingVoice.com regarding a series of exciting shows his promotional outfit have assembled for the next few months. Here are the charismatic Londoner’s views on:

“We’re back in the new season on September the 8th at Alexandra Palace with Darren Barker and Tony Bellew topping the bill with Eric Ochieng, Lee Purdy, Chris Evangelou, John Ryder, Kal Yafai from the podium squad and two of our youngsters debuting there, Martin Ward and Ian Weaver in support.”

“Barker is fighting the Italian middleweight champion (Simone Rotolo) who he should normally be much too good for but obviously he’s been out for a year of the back of a tough fight and injury. Rotolo is ranked with the IBF, it’s for the IBF Intercontinental title, and he’s also top 15 in Europe. I’m hoping Darren can look sensational against him but he has the pressure and rust to get away.”

“That fight has generated a lot of interest. To me that’s a great fight Miranda is very very dangerous, he likes to knockout or gets knocked out. Tony, although he’s British champion I just feel he needs to step up to that world level and fight a big name to get his own name out there. He’s a great guy, a great character, a great fighter and that’s going to be a cracking fight. I think Tony can do a job on Miranda and that will send out a big message”

“He (Gennady Golovkin) punches really, really hard. He never looks spectacular but out of nowhere you go wow, where did that come from? He’s one of these guys thats either hugely underrated or hugely overrated.”

“Proksa hasn’t looked sensational himself, but I he’ll give Golovkin the fight of his life only because he hasn’t faced anyone on Proksa’s level before. Proksa is very talented and punches very hard as well, it’s a tough fight but you have to take these shots”

October the 6th we have a bit of a tasty one inLiverpool with Prizefighter and Rocky Fielding combined. The line up is damn near genius but there’s been a lot of luck with timing. We’ve sold out already; we could have down with a three or four thousand venue. Mathews, Sykes, Crolla, Brough, Liam Walsh is dangerous, Kieran Farrell I really rate and Jennings and Needham are decent it’s by far the strongest line up we’ve had, it’ll be a cracker and Rocky Fielding will be going for his first title.

“The IBF have ordered it as a final eliminator to become the mandatory for the winner of Alexander v Bailey. Saldivia is all action, I know he got knocked out by Said Ouali inside a round but he also had him down 30 seconds before that. He’s a really exciting fighter, he’s going to stand in front of Kell and fight him, and it’s going to be a war.”

“We’re looking at three fights for Carl Froch, then evaluate the situation; I could see him walking away from the sport next year if he has those three big fights. The first one will be in Nottingham in November, it’ll a top 10 opponent in the IBF, It’ll be a defence. Then in March it will be Bute inMontreal, then in the summer it could be Kessler in the UK orDenmark. This could potentially be his last fight in the UK as the money tends to be better abroad.”