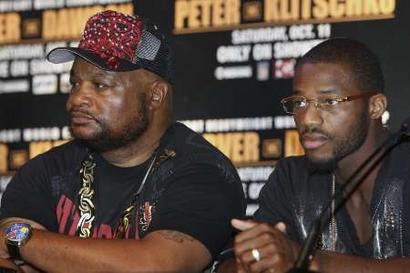 “I’m the type of trainer that’s boxed 15 rounds.  I’ve been in the trenches.  I know how to get out of trouble when you get into trouble.  I’ve been there, done that.  With me, Chad Dawson won titles and he’s still a champion.  He still has the heart of a champion.  He’s not just going to give up his belt.  He’s going after the best at 175.”  Tha Boxing Voice recently caught up with trainer Eddie Mustafa Muhammad, who is returning to Chad Dawson’s corner after a two year hiatus.  Here’s what he had to say:

Congratulations on recently reconnecting with your star pupil, Chad Dawson.  How does it feel being back in his corner?

There are some things that I had showed him that he had forgotten.  And when we got back together, and I started reiterating those moves to him, he kind of had this smile on his face like he was glad to be back, like he remembered.  He smiled, nodded his head in agreement and we just went on with our work.

You’ve watched Chad over the last two years and across four fights since your split.  At that time you said that your only regret regarding the separation was that you taught him all he knew but that you didn’t get a chance to teach him all you knew.  What’s first on that list of things to teach Chad at this point in his career?

First and foremost, he needs to start using that great boxing ability that he has.  Sticking that jab and putting more pressure on these guys behind that jab.  I was told by Chad that during the Andre Ward fight that he was really dehydrated and drained.  Making 168 lbs took everything he had out of him.  I wasn’t there and I can’t really comment on that but all I can do, all I will do, is make him a better fighter than he was in the Ward fight.

What went wrong against Andre Ward?

Andre is a phenomenal fighter.  No doubt about it.  I’m not going to take anything away from Andre Ward.  He’s one of the top two fighters in the world. When I watched the fight in my home, I saw Chad step into the ring and I knew something was wrong.

You noticed that right off the bat?

Yes.  He just couldn’t get his shots off.  He was getting hit with everything.  I’ve been working with Chad for a while we had some great victories together.  We’re the only ones that beat Antonio Tarver twice.  We beat Glen Johnson twice.  We had some good wins.  I know what Chad can do.  Like I said, we he stepped in the ring in knew what the problem was.  The problem with Andre Ward was the weight drain.

You helped him prepare for his last fight against Jean Pascal, did that have any bearing in your, and Chad’s, decision to re-unite?

No. it’s not that. Chad knows what I bring to the table. He’s been with some qualified trainers that he could have easily gone back to except for the late Emanuel Steward.  But he understands where I’m coming from and when we’re in the gym together, we click very well. Everything is great.

Chad has changed trainers more than a handful of times since turning pro.  What do you attribute that to?

When he decided to leave me, I didn’t raise a big stink about it because that’s not me.  I understand that this is a business so if he wants to leave it’s on him.  I have no animosity toward him.  I wished him luck.  But I know what I bring to the table.

I’m the type of trainer that boxed 15 rounds.  I’ve been in the trenches.  I know how to get out of trouble when you get into trouble.  I’ve been there, done that.  With me, Chad won titles.  He defended world titles. We had a good run.   I knew that he felt comfortable with me in there.

You never saw me in the corner arguing with Chad or Chad arguing with me. That’s not my thing.  I try to keep a calm and collective corner, which I do.

During the Ward fight, when he had John Scully as his trainer, there was confusion and arguing in the corner. Not Chad but the cornermen, period.  How are you going to keep a calm corner, and try to keep your fighter calm when you’re arguing with the help?  That’s not professional.  I don’t take anything away from John Scully but I know what I can do.

Is your agreement only to work together in preparation for the Pascal fight and see where it goes or has there been a discussion about a long term partnership?  And Are you concerned about Chad jumping ship again?

I think it’s pretty much water under the bridge but, then again, it’s not etched in stone that I’m going to be his trainer until he retires.  I would love to be because I know what I can do for his career.  I think I can make him reign supreme for as long as he wants.

It’s one thing to physically recover from the type of loss that Chad suffered against Andre but, psychologically, public perception is that it has been tough on Chad.  How do you find his spirits these days and his attitude four months since that fight?

Well, you know what, we boxed today.  We boxed 9 rounds in the gym with guys that are in the top 10 in his division and he looked real good. He wasn’t gun shy.  He let his hands go. We had a great time in the gym.

What types of changes will we see in Chad Dawson in March of 2013?

Fast combinations. A Steady stream of non- stop punching.   Boxing in and out.  That’s all I expect to see.  He’s still a champion. He still has the heart of a champion.  He’s not just going to give up his belt.  He’s going after the best at 175.