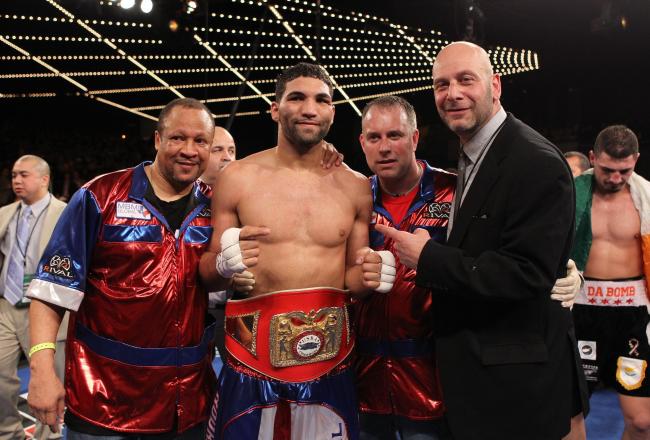 On paper to many, a fight between Edwin “La Bomba” Rodriguez against Jason “Monstrou” Escalera was seen as a mismatch. Escalera had not been in the ring with any fighter with the same talent level as Rodriguez, no less than any fighter Rodriguez has been in there with.

However, with talking to Escalera’s trainer and Escalera himself, I was sold it would be competitive. That it wasn’t. From round 1, you could tell the class in the fight was Rodriguez. Rodriguez landed plenty and often seemingly when he wanted too. When Rodriguez wanted to brawl, he got the better off Escalera. When Rodriguez decided to box, he made it look easy.

Rodriguez’ punches were hurting Escalera to the point where blood flew from Escalera’s mouth to press row and in many instances knocking out Escalera’s mouth piece. It was total whitewash where some judges even gave Rodriguez a few 10-8 rounds.

However, Escalera was game and his heart cannot be questioned.  After barely surviving the first round, he fought on, landing a few solid right hands on Rodriguez which Rodriguez took wheel and returned with more fury. “We wanted to take his confidence away early and we did that. After the first, Ronnie (Shields) told me take it easy and I did. I wanted to stop him by the 6th for my daughter’s birthday but we got it in the 8th, and I came out to do what I was supposed to do.

To most ringside observers, the fight was getting out of hand and was looking for a stoppage from the corner or stoppage from referee Steve Smoger; a stoppage that came too late in the 8th round. In the 8th round, Escalera came out already looking done was allowed to continue and took an unnecessary shot that may have busted his ear drum.

Rodriguez leaves with a victory and an inside shot at some of the top names in the super middleweight division. “Escalera was a tough kid but he was easy to hit and very predictable. I made a statement tonight. I am ready for the 168lbers, Kelly Pavlik or Jean Pascal,” stated Rodriguez. The future seems bright for Rodriguez. Many will say he was facing a game but unmatched opponent who he may have outweighed by many pounds as Rodriguez tipped the scales 22lbs heavier from yesterday’s weigh in. But he did what he had to do and now onto the contenders at 168lbs or maybe a jump in weight to 175.

For Escalera, one can only hope, tonight did not ruin what would be a good career for a good young fighter, especially in a fight where maybe his corner or Steve Smoger should have stopped earlier.