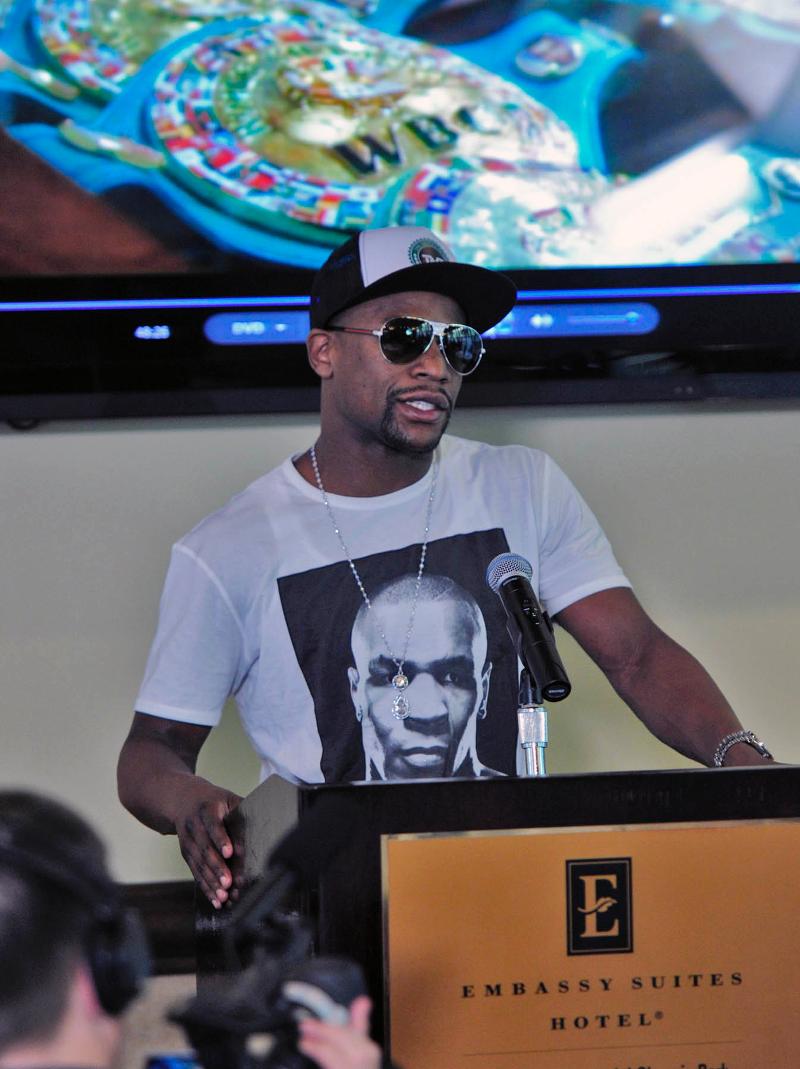 Atlanta (April 8) – Eight-Time and Five-Division World Champion Floyd “Money” Mayweather broke from his Las Vegas training camp over the weekend to attend the semifinals of the men’s college basketball tournament at the Georgia Dome in Atlanta.  While there, he also sat down with media members covering the tournament to discuss his upcoming WBC and Ring Magazine Welterweight World Championship mega-fight against Six-Time and Four Division World Champion Robert Guerrero taking place Saturday, May 4 at the MGM Grand Garden Arena in Las Vegas which will be produced and distributed by SHOWTIME PPV®.

Below please find quotes on an array of topics in “Money” Mayweather’s own words.

On the NCAA Tournament and Enjoyment of Basketball

“This year I really thought it was going to be Indiana.  One of my teams is still in it too, but unfortunately for me, I did not have them advancing to the Finals.  I will watch the game and am probably going to watch the first half before I decide to make a bet.    I have watched both teams [Lousiville and Michigan] and see how they play.”

“No one had Wichita State and I guess that is why they are called the ‘Shockers.’  Obviously that program is doing something right.

“I was telling Charles Barclay before my interview, during the Big East tournament, when Syracuse took the lead over Louisville, they started to play comfortably and Louisville came back and won the game.  Same thing happened Saturday against Wichita State, but I think if Michigan takes the lead on Louisville, it is going to be harder for them to come back.  Both teams are stacked with talent.

“These guys just poured their hearts out for the love of the game.  I just saw that situation at Rutgers where the coach was throwing balls and choking those players and those players didn’t go over the edge.  They knew they couldn’t because they weren’t in the position to pull their family out of a rough situation so they were in a tough spot.  In that case you have to take the bumps and bruises that comes with those situations. but I don’t think it was right what was going on and treating those young college kids playing basketball.”

On His May 4 Championship Fight Against Robert Guerrero

“I have been off for a year now, so I am looking forward to getting back in the ring.  Less than a month away, so I am excited.

“Robert Guerrero is a tough fighter, a solid, busy fighter.  He only has one loss, a champion in multiple weight classes.  Let’s see what he can do in there.  I am sure he is going to be able to make adjustments in that squared circle just like I can, so we will have to see what happens on May 4th.  We will have to see how the fight plays out.  I just want the fans to tune in.  It’s going to be an action-packed fight on May 4th.  I am willing to do whatever it takes to get the victory.  If I have to mix it up or box.  I am going to bring it.

“He [Guerrero] did something right to get here.  I am sure he is going to be on his ‘A’ game, but I am not really worried about what he can do.  He needs to worry about what I can do because I have already proven what I can do in the ring.

“I am very appreciative of what boxing has done for me and I am glad to have given back so much to the sport too.  I always wanted to be the best and I think I have proven that over the course of my career.

“I have been pushing myself in training camp.  I think my body is going to look tremendous for this fight.  I can’t say how my performance is going to be, but of course I am going to go out there and perform.  I always am at my best.

“On May 4th I am going to go out there, be ready and hopefully he is ready too.  This is the longest I have trained for any fight, so it should be a great night.

“I am going to dish it out against Robert Guerrero on this one.  I am going to be the Mayweather that is active.  I have young guys who are really pushing me in the gym for this fight.  Sure I have bad days in the gym, but I don’t have bad fight nights, bad paydays.

“Everything is going in camp like it should go.  My Dad and me have an understanding that we all work as a team so that is going well because I need my whole team.  My uncle Roger is coming along as far as his health, but one thing is for sure, that is my family and I love them.  We can’t choose our family and as my mother said in the documentary [30 DAYS IN MAY], they gave me a hand and I am just playing the hand they gave me.

“I really wouldn’t be here without my team.  My career is not just about the money like some people want to believe.  My career is about my legacy.  It’s also about living, loving and laughing and enjoying life.

“I go through ups and downs.  It’s a roller coaster ride.  I just keep on going and do the best I can, but I am strong and am going to continue to survive.  Continue to go strong not just for the sport of boxing, but to entertain the people too.

“I am happy to be with SHOWTIME and CBS.  This is the beginning of our relationship and for the next 30 months I plan to give you action-packed fights.

“I flew to Atlanta for the Final Four, flew to Miami to check my property, I am heading back to Las Vegas to train, then have to make a stop in Los Angeles.

“Everyone is entitled to his or her own opinion about me and my career.  I honestly don’t really care what you say.  I love my fans, but I don’t live for anybody except myself and my family.  I am comfortable with myself.  If people are out there saying ‘I don’t like Floyd Mayweather and he is only about the money,’ I am pretty sure I have some of their pay-per-view money too.”

On Heroes and Young Fighters

“The person you meet now is the same person you are going to meet down the road.  I don’t care what car I am driving or jewelry I am wearing. I stay who I am regardless of what you think I might be or who you think I am.

“People always say, ‘If I had this much money, I would do this or I would do that.’  Well those people don’t actually have the money or are not in my position.  As Stephen Espinoza just said, you don’t stay at the top for as long as I have just because.  I obviously have been doing something right.

“My mindset has always been to be the best.  I would rather be known as a smart fighter.  If you go back and look at my interviews from when I was young, I always said the less you get hit, the longer you are going to be able to stay in the game.  Going to toe-to-toe just because you can say you did it is not cool to me.

“Sure I have done it in some of my fights, like the Miguel Cotto fight, but there is also a limit.  I couldn’t have done that in all of my 43 fights.  There is a limit.

“I say to the young fighters that some things just aren’t cool.  They think taking a lot of punishment and going toe-to-toe in every fight is cool?  That’s not cool.  Or to be able to say they got locked up.  That’s not cool either.  I know I have mad mistakes but I can wake up every morning and say I have been honest admitting that.

“Also for the young fighters they should make sure they have a good team around them.  People that are going to keep it real with you and can help you make the right decision.  There are limits to everything you do.  Even though I might seem edgier at times, I have limits too.  I am older now and I understand it better.  Things can come to a young good fighter so fast they can get caught up in a bad situation. I am going to continue to mentor the young, up-and-coming fighters.  I will try to be the best mentor I can for some of these young fighters.

“For young people I say, work hard and dedicate yourself to your life.  Be respectful to your parents, go to school because education is important and never compromise to be the best that you can be.

On Training and Music

“If I was to identify with a rapper I would probably have to say Tupac.  Just with everything that has happened in my career and what he rapped about and his own life struggles, I would have to say.

“As far as listening to music, I am older now and I am an R&B man.  I got a lot of nice cars and when I am driving around in a nice Rolls Royce taking Ms. Jackson out to eat, I’m not trying to be bumpin’ some wild music.  Even in the gym or when I run with cars following me with the music, I tell them to give me some old school music, all old school.”