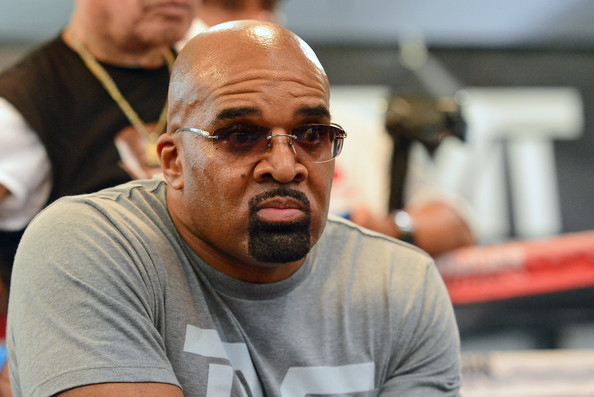 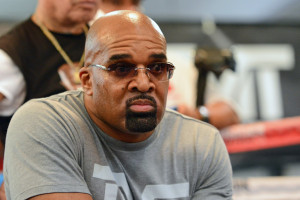 Did former welterweight world champion Zab Judah knock out Floyd Mayweather Jr. in sparring? Judah has already denied it, but you can be sure that all of Floyd’s sparring partners sign confidentiality agreements before they ever step into the ring with him. Can we trust Judah’s presumably “TMT approved” denial? Probably not.

In situations like this, the best we can do is simply make sense out of why the information may have come out and how everything may not be as it seems. In this case, we have a rumor coming out of Mayweather’s camp and Judah saying the only thing he is legally allowed to say. That’s not a lot of evidence, but it’s a start.

Leonard Ellerbe was interviewed on SkySports today as part of his duties in promoting the upcoming Mayweather-Pacquiao super fight, and he was asked point blank whether the rumors were true or false. Ellerbe quickly replied “false” and was then hit with a follow-up question in an attempt to wring a little more information out of him.

Ellerbe continued with the denial, “No, No, No, um… Zab is in camp; Zab is a tremendous fighter. He’s been helping with the preparation along with several other sparring partners; they’re really pushing Floyd but nothing like that. Never happened.”

So that’s it then. Even Ellerbe denies it ever happened! Case closed.

Wait… this is the same guy that Floyd was on the verge of firing back in September, right? Okay then, I guess Ellerbe said the only thing we could have expected him to say. Back to square one.

So, what do we know at this point? Let’s take a look at the hottest Mayweather stories over the past 7 days.

March 21: Floyd Is Beating The Shit Out Of Zab In Sparring

Here is my theory. After that March 19th drug test story had come out, Floyd’s camp wanted to get some nice press and make their fighter look good, so they floated some stories about Floyd manhandling his sparring partners. With the added cachet of a former world champion, they used Zab’s name to add some sizzle to their stories.

I believe that someone on Zab’s side of the fence probably took exception to Judah’s name being used in that way and responded by floating their own rumor to make their guy look good. Instead of Zab looking like the chump he looked like on the 21st, he now looks like the guy that may have knocked out legend Floyd Mayweather Jr. in sparring.

Big names and big fights bring about big rumors. Sparring rumors can make or break fighter reputations. As Zab approaches the twilight of his career, rumors of him being beaten up in sparring sessions can really hurt his prospects. With one well-placed rumor, Zab now has “rumored knockout of Floyd Mayweather” on his resume’. Say what you will about Zab, but the guy is always involved in interesting storylines.

You can see Pacquiao try to do what Zab may or may not have done to Mayweather in sparring, on May 2nd, live from The MGM Grand Garden Arena.