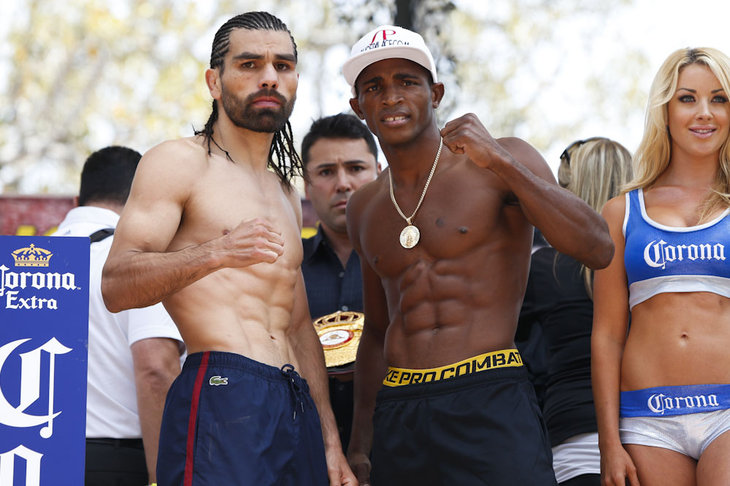 In the co-main event of Showtime Boxing’s Marcos Maidana vs. Josesito Lopez  broadcast, Erislandy Lara (18-1-2, 12 knockouts) and Alfredo Angulo (22-3, 18 knockouts) engaged in what was arguably the most memorable and exciting bout of the evening.

Of the two junior middleweights, it was no secret that Lara was the more talented boxer going into the fight. Even with this fact in mind there was no ignoring that Angulo had built a career out of stopping more talented fighters through sheer aggression and relentless punching power. Early on, however, things seemed to be going badly quickly for “El Perro”.

In the opening round of the bout, Angulo came out in his usual aggressive manner as he looked to force Lara along the ropes and force the inevitable stoppage. What Angulo didn’t seem prepared for however was Lara’s superior movement and slick counter punching which began to give Angulo fits. While Angulo continued charging forward, ripping hard shots to the body of the constantly moving Lara, Lara would pick his shocks and seemingly stun Angulo at will with a series of straight hands and crosses.

Just as Lara was beginning to develop a rhythm, Angulo comes on in the fourth round and manages to drop Lara along the ropes. With it being the first time Lara has suffered a knockdown, Lara recovered well and went right back to counter punching the always aggressive Angulo. Still, Angulo proved to everyone that the fight had the capability to end at any moment.

As the fight went on, Lara’s confidence only grew as he seemed to be the much more effective and overall fresher fighter. It’s this kind of confidence that almost cost him the fight after Angulo managed to drop Lara once again in the 9th round. With badly badly shaken by the punch the end seemed near, and Angulo knew it. While Lara tried to return to his counter punching tactic, Angulo kept coming forward with all intentions of stopping his opponent. Somehow, Lara managed to survive. This proved to be great news for the crowd, but bad news for Angulo.

Going into the 10th round of the twelve round fight, Lara was set on making up for lost ground. He begins the round by throwing a series of straights that all manage to find their mark. By this point the massive hematoma over Angulo’s left eye has become apparent, but Angulo still manages to pull through the pain and force Lara along the ropes. Just when Angulo was gaining steam, Lara unloads a flurry of left hands that for Angulo to turn away from the fight due to the pain. This forced the referee to call and end to the bout, and led to another stoppage victory for Lara.

Although it’s easy to focus entirely on Lara’s performance there is no ignoring that Angulo has definitely made improvements ever since siding with Virgil Hunter as his trainer. Win or lose, both fighters proved that they are talents worth following.