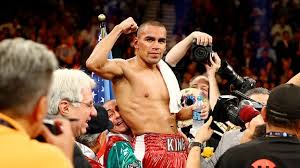 For those looking for a US outlet to watch the IBF Jr. Middleweight Title fight between Carlos Molina and Cornelius Bundrage, look no further. Dan Rafael of ESPN.com reports that the fight will be carried by ESPN3.com and ESPN Deportes (http://espn.go.com/blog/dan-rafael/post/_/id/10602/molina-bundrage-to-air-on-espn3).

The fight will take place live from Cancun because Molina is not allowed to fight in the United States after it was discovered he was in the country illegally. The promoter of note Leon Margules was excited about striking the deal and getting Carlos Molina televised in the U.S.

The broadcast is slated to air at 9:30 PM Saturday night with a 10 round co-feature taking place between Rene Alvarado and Juan Pablo Sanchez.