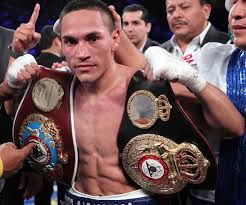 Juan Francisco Estrada defeated Hernan “Tyson” Marquez, which was expected, in an incredibly entertaining bout, which was just as expected. The matchup had been anticipated all week, and even longer by flyweight enthusiasts, and the beIN Sports Español main event lived up to those expectations as Estrada recorded 7 knockdowns, including the final knockout blow in the 10th. However, it wasn’t just a one-sided beat down, at least not in the early rounds.

Estrada successfully defended his WBO and WBA flyweight titles in front of a very enthusiastic crowd at the Centro Convenciones in Sonora, Mexico. With a heavyweight title on primetime network TV being broadcasted before, the little guys did not have to compete with much else.

Marquez was seen as the aged fighter with his best days behind him. Even at 27 years old, Marquez’s previous 45 fights had taken a lot out of him considering he is responsible for some of the best fights in the lower weight class throughout the years. Still, there were plenty of reasons to like this fight other than the hope for a highlight reel finish from Estrada.

There was a noticeable bounce in Marquez’s step early on and he kept up with Estrada, even out working him at certain points in the first few rounds. There were some big shots from Marquez, but Estrada ate them well. They seemed well-matched at times, which was surprising considering Estrada had earned a reputation as a pound for pound consideration since his loss to Roman “Chocolatito” Gonzalez.

Estrada was working in a very precise manner, but it wasn’t until he went to the body that he truly took over and showed Marquez’s miles.

Most of Estrada’s knockdowns were from body shots. However, he abandoned the body after several rounds of success.

Marquez was hurt in the fight, so much so that he didn’t appear like he’d make it out of several rounds. He managed to hang on and create some scarce offense of his own scattered throughout several rounds. You have to give Marquez credit for his hear and for the fact that most fighters in that predicament with his mileage would’ve quit or been unable to continue. That was not the case for the Mexican fighter from Sonora.

But Estrada eventually found his way back to the body. Before the final knockout, there were some solid fire fights, specifically in the 5th round. While Estrada was never in any real danger, he was able to showcase his iron chin.

It was the work to the body that softened up Marquez and was the main storyline in the fight, but it was a powerful right hand from Estrada that landed on his opponent’s chin that made the difference. Marquez was flattened and the referee waved off the fight immediately.

It was a solid win, albeit against a less than prime fighter. But Estrada’s biggest rival, Roman Gonzalez, will square off against Brian Viloria, who is in a similar positon as Marquez – two once great fighters past their primes and hampered by multiple fights of the rugged variety.

Hopefully, and assuming Gonzalez pulls off the expected victory in the co-feature of Golovkin-Lemieux on HBO PPV, the rematch between Chocolatito and Estrada can be made as it represents one of the best fights that can be made in the sport of boxing.