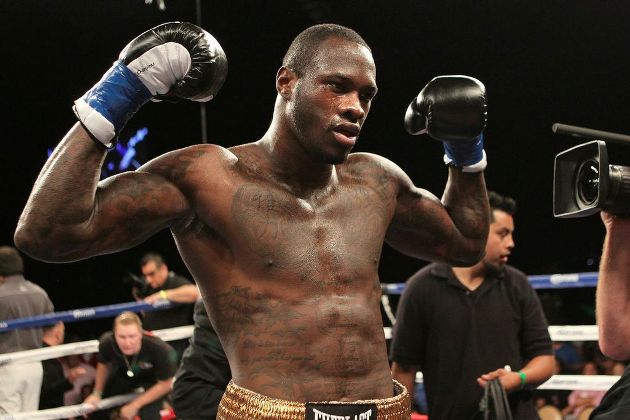 Deontay Wilder successfully defended his WBC heavyweight title in front of his hometown crowd at the Legacy Arena in Birmingham, Alabama. It was Wilder’s first appearance on Al Haymon’s “PBC” series and the first time a heavyweight title was being defended on primetime network TV.

Wilder was moving backwards and fighting off the back foot as Duhaupas was walking down the champion. It had little affect early in the first and Wilder looked like he was trying to get rounds in as he worked behind the jab, although he did flash the power a few times in the first. The strength factor was shown as Wilder shoved Duhaupas back with vigor.

Duhaupas was open for the right hand early and if Wilder wasn’t making it a point to gain experience he might’ve landed a fight-ending straight in the second round. It was refreshing to see Wilder pick his shots and pick them well. Wilder will rarely overwhelm his opponent with activity before establishing his power in a big way, but he was selecting his moments by setting up Duhaupas and getting into position with foot movement.

Wilder had landed over 80% of his power punches heading into the 3rd round, but he was making his jab a component in the fight. Duhaupas refrained from making the fight physical when it could’ve benefited him, but that’s probably because he knew he would’ve eventually been out muscled.

The third round was very entertaining as Wilder showed off his power at a high capacity. The volume of the power punches was as high as it had been all fight, but what was so scary about the round was the fact that he was landing everything. Duhaupas was already cut on the bridge of the nose from a right hand in the first round, but he was getting tattooed in the 3rd round.

As thrilling as it was to see Wilder showcase his skills and go full on offense, the one thing you had to take away was that Duhaupas was getting hit flush and yet he was still coming forward. In fact, there was only one very brief moment where Duhaupas wasn’t walking Wilder back in the one-sided offensive exchange. He proved he could take the former bronze medal winner’s power, at least to a degree, and still make a showing of himself.

The way Wilder was tagging Duhaupas made it seem as though the ref would take a closer look, but the body language and reaction from Duhaupas never allowed referee Jack Reiss to even consider stopping the bout.

Duhaupas proved he could stand the storm as well as chase it, but he had not really displayed any meaningful offense. There was some decent body work from Duhaupas and he used his jab well, regardless of the fact that he never followed up on it, at least not in a threatening manner.

The hometown crowd was reacting to everything Wilder was doing and they were desperate for the stoppage.

Wilder’s eye began to swell up significantly in the 5th round, giving Wilder some urgency. He started to look for the one big shot a little more than had previously been the case. With less than a minute left in the 5th, Wilder unloaded some huge uppercuts that finally zapped Duhaupas of his bravery. The offensive standing stopped Duhaupas in his tracks and Reiss finally had reason to take a closer look at possibly stopping the fight.

Duhaupas survived the round and continued to come forward in the 6th. Wilder was really putting his punches together in a big way as Duhaupas continued to bleed. Wilder was unloading big shots with his opponent standing right in front of the onslaught. Wilder was completely in his comfort zone now as he started to showboat just a bit.

Duhaupas proved the worthiness of his chin, but he was taking a lot of damage without producing any offense of his own. Wilder stunned his opponent in the 7th, but he recovered. Still, Wilder put the fight on high alert and Reiss was never far from the action. Duhaupas had surprisingly survived another round, but you got the feeling that Reiss was getting prepared to save the fighter from his own heroic tendencies.

Wilder’s eye was nearly closed, but he was making it a point to get as much leverage on his punches as possible and did not let the eye slow him down even a little. Credit had to be given to Duhaupas who had survived the fight thus far and still managed to keep a bounce in his step.

Wilder was getting desperate to finish his opponent. The desperation could’ve stemmed from his desire to leave an impression on a big TV audience and his hometown crowd or it could’ve been his eye combined with fatigue. He was not nearly as methodical as he was early in the fight, and he was missing a bit more.

There was a moment at the end of the 10th where Wilder got close to finishing the fight. The onslaught looked similar to the other moments we’d seen in the fight, but what was different was Wilder, who utilized the side step to create angles and get off punches that Duhaupas never saw until the moment they landed flush.

The end seemed near as the 11th started. Wilder landed a stiff right hand that shook Duhaupas, and possibly the building. He followed up on the right hand with a relentless attack of rights and lefts. Referee Jack Reiss decided that Duhaupas had taken enough damage and he ultimately stopped the fight.

It wasn’t as easy a stoppage as many thought it’d be, although Wilder’s hands took a bigger beating than any other part of his body. It wasn’t the highlight knockout that his team had hoped for, but it was probably a better fight for Wilder’s benefit as a whole.

Wilder improves to 35 wins with 34 KO/TKOs as he remains undefeated. In the post-fight, Wilder said it can be tough fighting at home because you want to give the fans a show, but he said he never felt the pressure.

“He did everything we expected him to do. We knew he was tough, we knew he was mentally tough. That’s why I tell people you can’t criticize nobody you don’t know. The most scariest people are the ones you don’t know of. He’s got a hell of a chin, too. He definitely earned my respect,” Wilder said of his opponent.

There is talk of Wilder getting a December/January fight, but it will probably depend on how quickly his eye heals. Hopefully, Alexander Povetkin is next on the list, but we could see one more fight before that showdown.