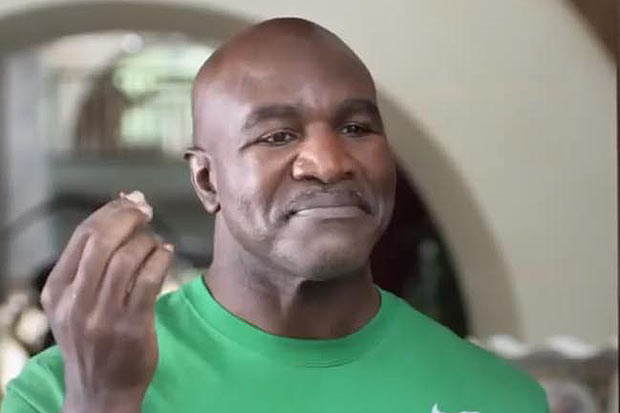 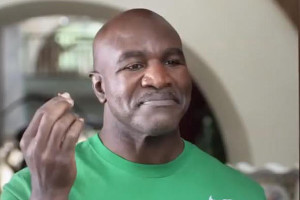 This past week, ‘The Real Deal’ Evander Holyfield was kind enough to answer some questions for Tha Boxing Voice’s man on the scene Sean Zittel while both were in attendance at the annual WBC Convention in Las Vegas, Nevada.

Holyfield is the only man to attain a triumvirate of heavyweight championships alongside Muhammad Ali, a statistic made even more impressive by the fact that he began his career as a light-heavyweight before moving up a class and unifying all three cruiserweight belts. Only then did he take another step up and walk amongst the giants.

Holyfield was asked his opinion on the outcome of Bermane Stiverne vs Deontay Wilder, scheduled to take place on January 17th with the WBC heavyweight championship at stake, that which was vacated by Vitali Klitshcko earlier this year upon his move in to the political arena.

“That’s gonna be a great match-up. I think it’s one of them things where boxing, after Ali, kind of fell down and it took a person like Mike Tyson to bring it back, and of course myself, and now there hasn’t been a heavyweight champ in a while. America is looking for their first American heavyweight.”

Holyfield is right in that the Americans have been starved of relatable figures on the heavyweight scene over the last decade-and-a-half. Since the early nineties with Tyson, Holyfield, Riddick Bowe, and even a young Lennox Lewis, there hasn’t been any dynamic, exciting heavyweights with English as their first language, that capture the imagination of the public, especially in the US.

Now Deontay Wilder has the opportunity to bring the belt home so to speak. But even though he will become an official belt-holder should he beat Stiverne in the new year, the real challenge is that which is sure to follow. For the majority of the past ten years Wladimir Klitshcko has been the heavyweight champion of the world. As of this writing he holds the WBA super, the WBO, the IBF and the lesser-known IBO heavyweight championships. How would the winner of Stiverne vs. Wilder stack up against the Ukraninan behemoth?

“I think styles make a fight and I think Deontay with his reach, I think he would do better than the other guy you know. He [Stiverne] can take shots and stuff like that I just think force, boxing ability, Kilitshcko may have too much for him. But with Deontay I think being young and scrappy, you know when people been fighting a long time they don’t like fast-paced fights.”

It would be a crazy sight to see Wilder go hell-for-leather against Klitshcko and let everything hang out, but the thing is, I’ve never seen Wilder do that. In all of his thirty-two knockout fights he has finished his man inside the distance and has never made it in to the fifth round. He waits and waits, then unloads. On one hand that is a very positive quality that has elevated him to contender status, but on the other it leads to question marks about what would happen if he gets dragged in to the later rounds. Klitshcko has no problem going the twelve round distance if he can’t drop the hammer early on. I find it difficult to see Wilder going all out and potentially exhausting himself with this in mind. A tired man in the ring with Klitshcko is as good as a dead man.

The interview closed with Holyfield pontificating on where Klitschko stands amongst the great heavyweight champions of times gone by, something that has to be considered now that the champ is closing in on Joe Louis’s long-held record of most title defences in the top division.

“Well, I would not try to take a person down. I think it all depends on who was there. If there had been some better people maybe he would have got better. You only fight as good as the people you have to beat.”

If you follow this line of reasoning then Klitshcko automatically stands beneath the men who ruled in what is considered to be ‘the golden age’ in heavyweight boxing. The 1970’s. Muhammad Ali, Joe Frazier, George Foreman, Ken Norton; even lesser known fighters like George Chuvalo, Jimmy Ellis and Ernie Terrell were bad M’Fers that would batter most heavyweights today in many people’s opinions (though fantasy match-ups are much maligned here at Tha Boxing Voice). Be it perception or reality, this is the way it stands. Klitshcko will likely not get the credit he deserves for his dominance until many years have passed. Perhaps then he will be spoken about in the same hushed tones as the men mentioned above. If he schools Wilder though -the younger man with the bigger punch- he will give his legacy a massive boost, especially on the west-side of the Atlantic.