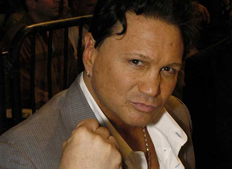 On Friday, Nov. 7th, 2014, CES Boxing will team with Verdi Productions to give away 100 VIP ringside tickets to Bleed For This, the film based on the life and career of five-time world champion and Rhode Island icon Vinny Paz.

Fans who attend Friday’s boxing event, “Winner Take All,” at Twin River Casino in Lincoln, R.I., can win front-row tickets to be in the boxing scenes that will also be filmed at Twin River beginning Wednesday, Nov. 12th. CES Boxing and Bleed For This will also be raffling off restaurant gift certificates, flat-screen televisions, tickets to Rhode Island premiers, boxing gloves signed by Paz and actors from the film, plus a chance to have lunch with Paz himself.

Bleed for This is executive produced by Martin Scorsese and also stars Katey Sagal, known for her role as the iconic character Peggy Bundy on the now-syndicated hit series Married … With Children and her portrayal of Gemma Teller Morrow on Sons of Anarchy.

The film tells the true-life story of Paz, a five-time world champion who suffered a broken neck in a near-fatal car accident at the peak of his career. After months of recovery, Paz ignored doctors’ orders and returned to the gym under the guidance of former Mike Tyson trainer Kevin Rooney and made his triumphant return a year later, winning three more world titles before the end of his career.