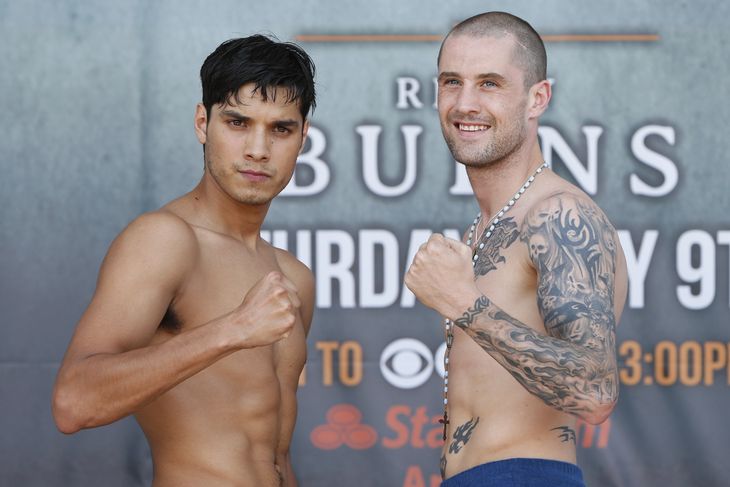 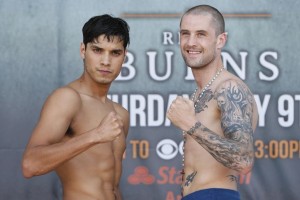 Omar Figueroa got all he could handle in his junior welterweight debut against Ricky Burns in Figueroa’s home town of Hidalgo, Texas at the State Farm Arena. The main event was featured on the “PBC” series on CBS.

Burns started out red hot in the fight and looked sharp. It wasn’t completely clear if Burns’ shots were hurting Figueroa, but he was certainly creating momentum and winning the fight. Burns’ jab was the biggest factor at the start of the fight, he stayed on his toes and bounced around well. Omar, who is known for throwing punches in bunches, allowed Burns’ activity to consume him just a bit.

The second round started out in the same kind of way that the first ended and Burns was staying sharp. It looked early on that Omar’s size advantage wasn’t going to be as big of a factor as some originally thought. Omar was able to close the second round a little better than the rest of the fight thus far, but he wasn’t making the adjustments.

Figueroa’s typical style wasn’t working the way he might’ve considered and Burns certainly didn’t back down but instead used his footwork to move out of the way. Burns was smart with staying out of the firefight with Figueroa by smothering his opponent and pummeling him inside. At times, Omar found a way to throw some flashy combinations but with not much on them.

One of the side plots in the fight was the interference from referee Laurence Cole. He was very active in the fight, even when it wasn’t called for and it actually dulled the action.

The fight turned real sloppy and the ugly style fight started favoring Figueroa. Burns started fighting Figueroa’s fight and Figueroa was fighting his fight in all the worst ways. Just as one fighter would start to pull away, both fighters would lock horns.

Cole ended up taking a point in the 8th round for what he called holding.

Towards the end of the fight, things got very exciting. Both fighters were showing heart and standing toe-to-toe with nothing but adversity keeping them going. Figueroa showed a little more punching skill in the final rounds by mixing up the attack. However, it was Burns that closed the show well.

The fight went the distance and the judges’ scorecards read 117-109 and 116-110 twice, all for the home town fighter of Figueroa.

In one of the evening’s undercards, Austin Trout defeated late replacement opponent Luis Galarza with a 7th round TKO.

Trout boxed very well, but his inside fighting was the big improvement in the fight. Galarza held his own in the fight, but he wasn’t able to get away from Trout’s uppercuts and hard left hand.

In the telecast’s co-feature, Jamie McDonnell successfully defended his WBA bantamweight title against Tomoki Kameda in what was the best fight of the card.

McDonnell was knocked down in the 3rd and it appeared as though Kameda would run away with the fight. However, McDonnell got off the canvas and started firing off shots to get himself back into the fight.

McDonnell rebounded well and it turned into a real close firefight. Some of the rounds were very difficult to call and both fighters deserved tons of credit for the way they fought. The fight ended up going the distance, however.

All three judges scored the bout 114-113 for McDonnell in a razor close and very entertaining title fight.