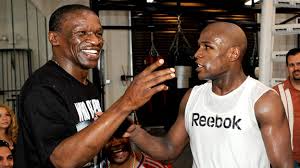 “The fight isn’t even worth talking about,” Floyd Mayweather Sr. said to ThaBoxingVoice.com when asked about a potential fight between his son and Manny Pacquiao. “If they fight, you know what is going to happen to Manny. Even though my son is older now, Floyd is going to take him apart. It would be a miss match.”

Last week, Kathy Duva revealed the news about Al Haymon bringing boxing to NBC, on regular free television, taking the fights away from premium networks and PPV. We asked Mayweather Sr. what he thinks about the possibility that the fight between his son and Manny Pacquiao could land on free television.

When asked what else might be out there for his son, Mayweather Sr. answered, “There is nobody else left for him to fight.”