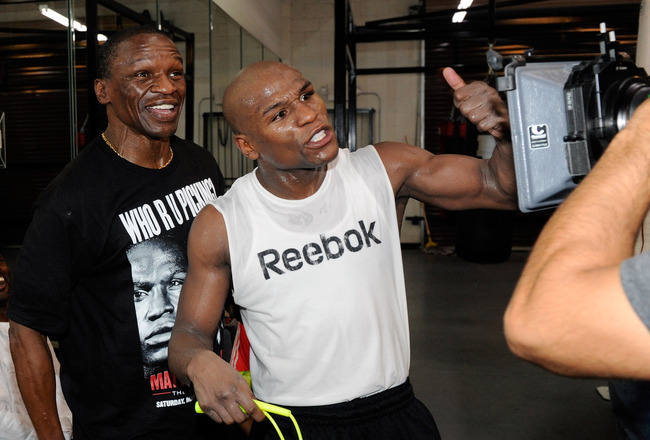 Thaboxingvoice.com recently had an opportunity to speak with Floyd Mayweather Sr. regarding various topics associated to boxing, specifically that of his son, current Pound for Pound champion, Floyd “Money” Mayweather Jr. and his intent to link back up with him from a training standpoint.

Floyd Jr. is currently trained by his Uncle, and Floyd Sr.’s brother, Roger Mayweather. However, Roger’s well documented battle with lung disease could have an effect on his availability to train his nephew for his upcoming bout, tentatively scheduled for May 4th, yet there is still no opponent set.

Floyd Sr. told Thaboxingvoice.com that he is willing to step in for Roger and he expects to get the call should Floyd fight junior middleweight Saul “Canelo” Alvarez, a fight Golden Boy is looking to capitalize off of eventually.

“He’s still my son, father and son break up and make up, and it’s still your family at the end of the day. You got to be able to forgive. He hasn’t spoken to me yet. If Roger can’t do the job, his (Floyd Jr.’s) daddy can,” Floyd Sr. said.

Although recent Tweets from Floyd Jr. seem to indicate that Devon Alexander is the front runner to land the May 4th fight, Floyd Sr. is operating under the assumption that he will fight Robert “The Ghost” Guerrero, who is in fact the interim titlist to Floyd’s WBC welterweight title. Yet, Floyd Sr. maintains his stance that the Canelo fight is the one that is part of the bigger picture.

“He might fight the Ghost [Guerrero], but if he fights Canelo I’m pretty sure I’ll be training him. Daddy is going to step in and take care of business. I’m more than sure when [Floyd] gets ready for that fight [with Alvarez], his Daddy will be ready to fight too,” Floyd Sr. said.