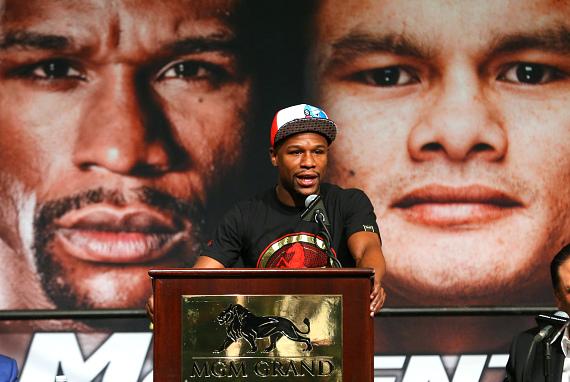 When one talks about boxing today, it seems to be a sport where business almost seems to trump all. After all, boxing promotions and their promoters seems to share the limelight with their stable of established and up-and-coming fighters. Just consider the fact that Al Haymon, Oscar De La Hoya, and Bob Arum have been making just as many headlines as the fighters they represent.

This has become especially true following the public falling-out between De La Hoya and Richard Schaefer, prompting Schaefer to resign from the promotion he helped create, Golden Boy Promotions. Although the business has always had  a reputation for being cut-throat in its back room politics, it has also proven to be incredibly profitable for the select few. It’s this fact that has prompted Mayweather to take on the role of both promoter and fighter with his own Mayweather Promotions.

With his reputation as a business man and his draw as an undefeated fighter, many are quick to compare Mayweather’s promotion company to De La Hoya’s Golden Boy Promotions. After all, both were created by some of the most popular valuable fighters in American history. Still, Mayweather is quick to separate himself from fighters turned promoters like Oscar De La Hoya and Mike Tyson. At the end of the day, it was Mayweather’s “self-made” image as a fighter that will earn him success as a promoter.

Whether that be the case or not, one cannot deny that few can sell Mayweather better than he sells himself. With an ego as big as his bank roll, and an undefeated record that comes by utter dominance it’s hard to ignore Mayweather’s status as one of the best, if not the best fighter today. Even so, fans tune in to see when and if Mayweather ever receives a blemish on his still perfect record especially as he creeps closer to 40-years old.

It’s a known fact that some fighters don’t know how to quit while they’re ahead, and many begin to question whether the thought of losing is one that creeps into Mayweather’s head more often as he gets older and opponents get stronger.

“Losing, we don’t even talk about that. When we talk about taking the “L” we’re talking about opponents taking the “L”. Our focus is to be the best that we could be, give the fans excitement, and to go out there and entertain. We always believe in self-preservation, and I truly believe that I come first.”

As sure as Mayweather and his camp may be, a surprisingly close win over Marcos Maidana in May left some fans believing that age may finally be catching up the Mayweather. It’s ultimately what fueled the desire to seek out a rematch with Maidana, and a chance to prove that his status as the best is still unchanged. It’s a topic of conversation that Leonard Ellerbe seems particularly passionate about when it comes to his fighter.

“The perception out there is that Floyd’s been the best. He hasn’t become the best, he’s been the best. Any kind of success any fighter has against him people tend to gravitate towards that. It was a great fight for the fans; it was the fans who really wanted this fight, and Maidana has vowed that he is going to do this for all of the Hispanic fans. He’s putting all of the Hispanic fans on his back so he’s representing them, but the fans can’t fight for him.”

As a businessman, what Ellerbe says rings true no matter how typical a response it may be. Regardless, the fans can’t lose with the announcement of a rematch, and it’s this decision to go through with it that shows Mayweather’s chops and potential as a promoter.

“If that’s what is going to motivate him (Maidana) then I’m behind him 100% because that’s what it’s all about; giving the fans what they want to see, entertainment.”