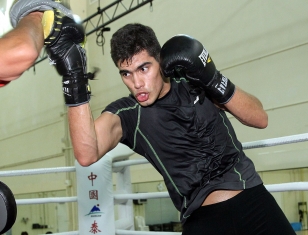 MACAO, CHINA (July 17, 2014) — Undefeated Top-Five world-rated super middleweight contenderGILBERTO “Zurdo” RAMIREZ (28-0, 22 KOs), of Mazatlan, Mexico, is ready for his debut on the international stage.  The southpaw Ramirez, 23, with the mega-watt smile and matinee idol looks, has graduated from prospect to bona fide world title contender.  He will be defending his perfect record and sterling ratings (No. 2 WBC & WBO / No. 3 WBA / No. 4 IBF) when he defends his NABF and NABO super middleweight titles against“The One” JUNIOR TALIPEAU (20-2-1, 7 KOs), a New Zealand native who fights out of Kogarah, New South Wales, Australia.  The Ramirez-Talipeau super middleweight title fight will take place This Saturday!  July 19, at The Venetian® Macao’s Cotai Arena.  Promoted by Top Rank® and Sands China Ltd., in association with Tecate, All Star Boxing, Caribe Promotions and Foreman Boys Promotions, Ramirez vs. Talipeau will be televised via same-day delay on HBO2, beginning at 5:00 p.m. ET/PT.  The HBO2 telecast will also feature two-time Chinese Olympic gold medallist and national icon ZOU SHIMING (4-0, 1 KO),of Guizhu, China, stepping up to his first 10-round bout, facing off against hard-punching veteran and three-time world title challenger LUIS “Chino” DE LA ROSA, (23-3-1, 13 KOs), of Barranquilla, Colombia.  Zou and De La Rosa will be fighting for the vacant WBO International flyweight title in a battle of Top-10 contenders.  Zou and De La Rosa are world-rated No. 6 by the WBA and No. 10 by the IBF, respectively.

“I am very excited to be making my HBO debut on this card and I want to make a good impression so I can continue fighting on HBO.  This is the Zurdo Ramirez Era and I want to shine.  I am prepared for Junior Talipeau and I am prepared to give a good show on Saturday.  I want to prove — in the most emphatic terms — that I am ready to challenge for a world title.

“This is my first time in Macau and I love it.  The Venetian Macao is fabulous and the fans here are great.  The climate in Macau is similar to Mazatlan and I had no problem adjusting to the time zone change.  My punches land just as hard here as they do in the Western Hemisphere.”

“I am excited for this fight and have trained very hard.  I am impressed with Ramirez’s accomplishments but I am no intimidated by them.  I intend to attack him early and bang his body and head and stop him late in the fight.

“It’s a great incentive to be the first one to blemish his perfect record and derail his world title shot plans.  I did not travel to Macau to be another number in Ramirez’s victory column.  I came here to win.  I came here to hurt.”

Ramirez (28-0, 22 KOs), of Mazatlan, Mexico, is world-rated No. 2 by the World Boxing Council (WBC) and the World Boxing Organization (WBO), No. 3 by the World Boxing Association (WBA) and No. 4 by the International Boxing Federation (IBF).  A sensational young contender, Ramirez, 23, has won both his 2014 bouts by knockout.  In his last outing, on April 11, he captured the NABF and NABO super middleweight titles via a fifth-round knockout of two-time world title challenger Giovanni Lorenzo.

Talipeau (20-2-1, 7 KOs), a New Zealand native who fights out of Kogarah, New South Wales, Australia, was a former Australian middleweight champion who successfully defended the title five times during his  two-year reign before moving up to the super middleweight division.  Boasting a victory over two-time world title challenger Shannan Taylor, Talipeau enters this fight having won two of his last three fights by way of knockout. His most recent victory was a 12-round unanimous decision over Walter Crucce for the WBA Latin American super middleweight title.  He is currently world-rated No. 14 by the WBA.