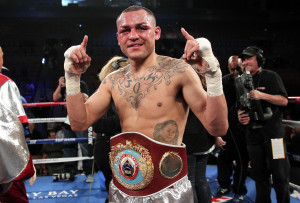 Mike Alvarado began his year redeeming a loss to Brandon Rios in March of 2013. This is when it gets a little unusual. Alvarado was said to be the front-runner to land a Manny Pacquiao shot at the end of the year. That shot never came to fruition. Then, Mike Alvarado was rumored to be out of the year with an injury, that didn’t happen either.  Instead the man he defeated, Brandon Rios got the call to fight Pacquiao and Alvarado got a home fight in Colorado where he loss via TKO to Ruslan Provodnikov.

So Alvarado starts his 2104 where he began 2013, looking for what else, redemption.

“I’m a make a huge statement and show them what redemption is all about. I’m going to show that I’m better than good, that I’m on my way to being great,” Alvarado told ThaBoxingVoice.com

Alvarado will confront the Mexican icon Juan Manuel Marquez when they reopen the forum in Los Angeles on May 17th. Marquez has certainly had bigger fights but Alvarado gets the sense that Team Marquez maybe overlooking what’s in front of them.

“I kind of got that impression, they’re thinking bigger fights. It may have changed when they saw me, saw how big I was. But I think they’re going to have a rude awakening, having a hungry for Mike Alvarado coming for them,” explained Alvarado.

Marquez is well known for his counter-punching ability. Could it be Alvarado that’s in for the rude awakening? Because as he says, “I don’t plan on playing the chess match with him. I’m bigger, stronger, and younger. I’m going to step right to him because I want to get him out of there as quick as I can. I’ll deal with his counter punching; let’s see how he deals with my pressure. Any punch can land the fight with me it’s just a matter of me landing that shot.”

This shot will come at a catch weight of 144 lbs which Alvarado feels is to his benefit. Alvarado has fought at 140 lbs for quite some time and felt this move will only make him stronger and better because making 140 became a torment.

“It’s going to help me out a lot. The last couple pounds were killing me at the 140 lb division. I’d go to the sauna and it’d be hard to sweat anything out. Even after this catch weight I’ll probably move up anyway,” explained Alvarado. The weigh could have also played a factor in his last fight. “I think the weight played a little bit with Provodnikov. I was letting too many  small distractions get to me, I wasn’t really prepared as I should have been, I don’t blame no one but me but me but I’m thankful for this opportunity.”

That opportunity could equal a golden notch on the belt of Mike Alvarado and could lead to retirement for Marquez.