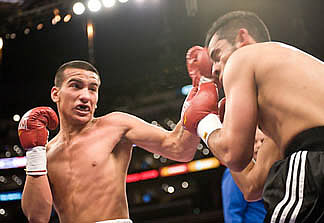 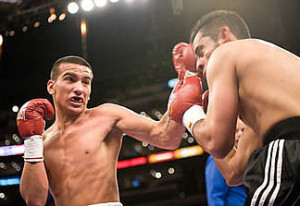 “The Corpus Christi Kid” Jerry Belmontes received an energetic hometown welcome from the Corpus Christi fans that came to see him square off against Abner Cotto at the American Bank Center. It was a crossroads type of fight for Cotto, but for Belmontes, it was a chance to leave a lasting impression in a televised feature as he searches for a major fight to close out the year.

It was Belmontes’ first fight since his split-decision loss to Omar Figueroa and he was determined to make a statement against Cotto, after all, it was Figueroa who blasted Cotto in the 1st round of their April 2013 fight.

In the opening round Belmontes was moving and it was clear his game plan would be to outbox Cotto. The game plan was working and in the closing minute of round 1 Belmontes landed a tremendous body shot a the left and Cotto was clearly hurt as he retreated to the ropes.

Belmontes displayed his superior boxing skills as he tagged Cotto while fighting off the back foot in the early rounds, but Cotto would not be discouraged.

There was a point deduction in round 4. The point was taking from Cotto after landing a low-blow on Belmontes. It was a questionable point deduction because there was no warning and Belmontes hit Cotto with some accidental fouls in the round prior to the deduction.

Belmontes stayed the course and decided to trade in the pocket a bit more, which he paid for as Cotto started landing in close range. Belmontes was actually robbed of a knockdown in round 7 after he landed a straight right on the chin of Cotto, but the ref ruled it a slip.

Belmontes got away from his game plan later in the fight and that allowed Cotto to take advantage of some opportune rounds. While it was clear Cotto wasn’t hurting Belmontes, Belmontes gave up some rounds by putting his hands down and allowing Cotto to use him as target practice.

Still, Jerry was able to get back on track when he bared down and refrained from fighting Cotto’s fight. However, Cotto didn’t allow Belmontes to get settled and became more aggressive while Belmontes was a little more hesitant. I think Belmontes took too much comfort in the fact that Cotto couldn’t hurt him.

The fight was close coming down the stretch, at least closer than it could’ve been. Two of the judges scored the fight 95-94 for each fighter while the deciding judge scored the fight 96-94 for Cotto, giving him the split-decision victory.

After the fight, Cotto told media that he wanted it more and that he was always in control of the fight.

“I had this, this was my fight. I took it to [Belmontes] and the judges saw that,” Cotto said.

As for Belmontes, he believed he won the fight. His manager, Adrian Clark said that Belmontes fell into his old patterns and gave away rounds down the stretch.

“Cotto out worked Jerry, it’s a pattern where Jerry comes out boxing and then went into the pocket [later in the fight].”

As for whats next for Belmontes, Clark had some idea.

“Jerry is going to have to show up and stay consistent in his next fight. He’s been in this position before and he will just have to fight his way out of it, but consistency will be key,” Clark stated.

In the evening’s co-feature it was talented prospect KeAndre Gibson taking on the always tough Jose “Loco” Hernandez. This would be Gibson’s most difficult fight to date because Hernandez is the non-stop, come forward type of fighter that prospects typically struggle with early on.

Gibson moved well side to side and used faints to work his punches in range. But Loco implemented his rugged and hard to gauge fighting style, which made it difficult for Gibson to find anything more than minimal success in round 1.

Gibson’s fast hands were on full display as the fight continued forward and his superior head movement and footwork made it difficult for Hernandez to land anything significant, although that didn’t stop him from trying.

Gibson committed to the body and used the body to set up the head. However, Loco was not a punching bag, he continued forward and tried to close the distance, landing some meaningful body shots in the process.

It was clear that Gibson was the superior craftsman in the ring, but Hernandez displayed heart by eating punches and firing back with body shots and loaded up hooks.

Hernandez worked his way back into the fight but it was pretty late in terms of winning rounds. The end of the fight was much more competitive, but the last round contained a lot of dirty tactics from both fighters.

Gibson did enough early however, and secured the victory by split-decision. The judges turned in scores that read 79-73 and 78-74 for Gibson and 77-75 for Hernandez.

“It was a learning experience for me, I learned a lot in there and he was a tough, tough fighter. I felt his power but it wasn’t enough to stop me from landing,” Gibson said.

When asked whether he regretted fighting Hernandez’s fight, Gibson said “Absloutley not, I’m an entertainer. My job is to fight and I showed I could outbox him and out brawl him when I wanted to.”

Kingsville, Texas native Oscar Cantu opened up the telecast against San Antonio’s Joseph Rios. It was a spirted affair from both fighters with Rios walking Cantu back and Cantu picking his shots early in round 1.

The exchanges were pretty heated and neither man was afraid to make it a firefight. Oscar tried to slow the pace down at times but never truly committed to working his boxing skills. At the same time, Rios was aggressive and didn’t allow Cantu to establish a working game plan for long periods in the early rounds.

Oscar eventually took control in the middle rounds and separated himself to earn the unanimous decision victory.