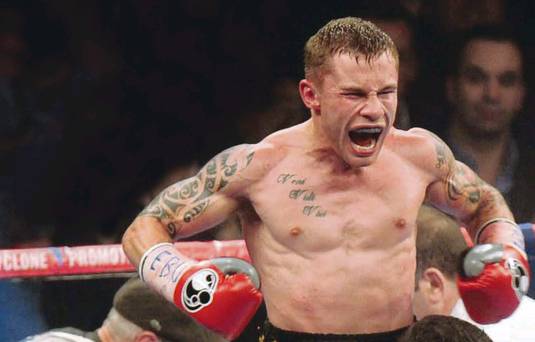 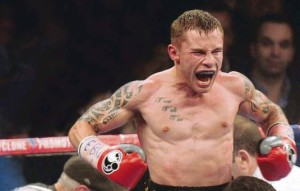 World title challenger Carl Frampton has vowed ‘the best is yet to come’ ahead of his date with destiny this weekend.

The Irish sensation takes on Kiko Martinez for his IBF super-bantamweight world title on Saturday night, in a 16,000 capacity arena in Belfast’s Titanic Quarter.

The bout, live and exclusive on BoxNation, will see the unbeaten 27-year-old make his first bid for a world title as he faces the tough Spaniard Martinez, an opponent he previously overcame via a ninth round stoppage early last year.

That victory, at the Odyssey Arena in front of his adoring Belfast public, has seen the Ulsterman go from strength-to-strength, blasting his way past Jeremy Parodi and Hugo Cazares en route to the impending world title shot he has dreamed of his whole life.

“It’s going to be a dream come true to win the world title. I started this long journey at seven years old and had my ups and downs, so to become a world champion in my 20th year of doing this sport, in a stadium built for myself – it’s what dreams are made of,” said Frampton.

Victory, he believes, will take him to another level.

“I don’t think you’ve seen the best of me. I’m 27, in the prime of my life but there’s still plenty more to come. I can see and feel the improvements everyday in training and after sparring. The best is definitely yet to come,” he said.

Known as ‘La Sensación’, Martinez surprised boxing critics the way he bounced back from his loss to Frampton by stopping the undefeated Colombian Jhonatan Romero, stripping him of his IBF belt.

Frampton, though, isn’t expecting anything different this time around from the 28-year-old and believes he will be facing a fighter who has the same approach.

“I think this is his 35th or 36th fight and every single one of his fights he has boxed the same way. He comes-forward, he’s aggressive and has an exciting style that the crowds like,” said Frampton.

“I think our styles clash well and make for a good fight but I don’t see him doing anything different and expect him to come head first, trying to knock me out.

“But it’s up to me to remain smart and switched on for the twelve rounds and as long as I stay focused there’s only going to be one winner,” he said.

A win for ‘The Jackal’ would open up a host of potential megafights down the line with the likes of Leo Santa Cruz, Guillermo Rigondeaux and even Britain’s Scott Quigg options for the future.

Frampton is aware, however, that he must first get past Martinez but has fired a warning shot to all his foes at 122-pounds.

“I’m preparing for a hard, gruelling fight, that may take 12 rounds but no matter what happens I’m going to win. I also know I have the power to knock any super-bantamweight in the world out,” he said.

“So it could be a 12-round points decision or it could be over in the first round. Nevertheless, I’m preparing for a very hard and brutal fight then we can talk about future fights,” Frampton said.