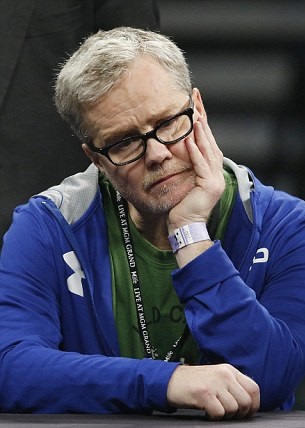 Freddie Roach has always been known to do as much as possible to give his fighters the psychological edge before they even step into the ring on fight night. Freddie usually does this by making remarks about how well his fighter matches up with his foe, or simply how his fighter is going to dominate in every aspect, and he is at it again.

In an interview with FightHub’s Marcos Villegas, Roach was asked several questions ranging from keys to the fight, a possible GGG-Cotto clash, and about the man Miguel will be defending his lineal middleweight WBC belt against, Saul “Canelo” Alvarez, and yes, Roach was very open and blunt when asked about the Mexican superstar.

When Villegas asked Roach what he saw in Canelo that makes him so vulnerable to Cotto’s style, Freddie had this to say,“I have a lot of insight on his training camps and so forth, he trained in my gym for three fights and I don’t think he’s the most dedicated guy in the world.”

That is a serious shot to call a professional boxer at Canelo’s level “not dedicated.”

Is Roach telling the truth? Who knows?

It can be agreed, however, that it is a very strong accusation to make, even if he did train at the Wild Card for three fights. Freddie went on to praise how dedicated and committed Cotto is to his craft and would do anything to win.

Roach throughout the interview praised Cotto’s condition and work ethic as he prepares for this fight. Freddie believes that the toughest part of the fight for Miguel will be in the first few rounds, as Freddie is aware of the pressure Canelo likes to put on in the early rounds. He is under the mindset that Cotto needs to have enough energy towards the end of the fight in order to knock Canelo out (something that is almost a given now, Roach predicting a knockout victory for his fighter.) Freddie used another one of his famous clichés in this interview claiming we would see a different Miguel for this fight.

Freddie continued to elaborate on how they plan to handle Canelo. From what it sounds like, Freddie wants his fighter to box and move around against the larger and younger man, which most would agree is the intelligent choice, especially considering Cotto’s highly underrated pure boxing ability. Roach also stated that he believes Miguel has the better hook than Canelo and thinks that they have the advantage over Canelo inside the pocket, as Canelo needs more room to punch than the smaller Cotto.

Freddie then defended his fighters past three opponents, saying Geale was a former two-time champ, and claiming Martinez wasn’t injured in that fight, rather he just got hit a little fat. Villegas then asked the Hall of Fame trainer to compare Cotto and Canelo’s resume at this point, which Freddie admitted was almost unfair to analyze at this point due to the fact that Canelo is still so young and hasn’t had the same chance as Cotto in terms of big names to face yet.

The climax of the interview, however, was towards the end. When Villegas asked Roach what’s next assuming Cotto gets by Canelo to which Roach responded, “Not so sure, maybe Triple G is next!”

Roach claimed that it is a fight him and Miguel both want, “We both say why not, it’s a big fight and so forth, [there are] a lot of negotiations that go on after that so it’s just not going to happen automatically.”

At last, the elephant in the room was addressed by Villegas, who asked Roach some really intriguing questions during this interview, when he questioned if Cotto-GGG would happen at 160 or a catchweight and if his fighter felt confident to fight Golovkin at the full middleweight limit of 160. Roach had this to say,

“Well the thing is I don’t like catch-weights and I think he should fight at 160, but again I’m not the manager and I don’t make those decisions, so you have to ask Gaby about that one cause that’s his job not mine.”

So Freddie just isn’t taking shots at Canelo, he also took one at Cotto, considering Cotto’s three fights at middleweight have contracted catch-weights of 159, 157, and now 155 vs Canelo. One cannot blame Freddie for having a distaste for catch-weights, but they are part of the sport now, especially for A-sides.