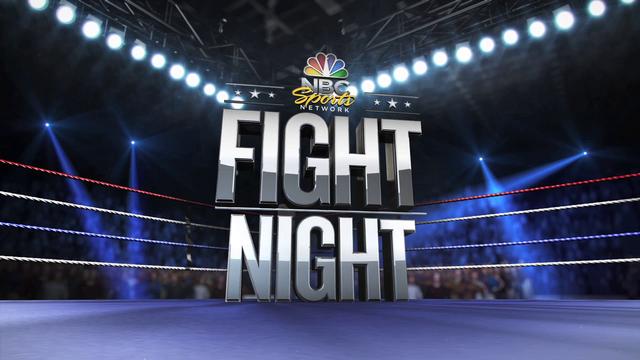 In what was a packed house with only a few seats still available as the first bout began, Main Events and Star Boxing co-promoted an NBC Sports Televised fight card at The Paramount in Huntington, NY. The main event would feature two unbeaten heavyweights with tough Ukrainian standout Vyacheslav “The Czar” Glazkov (14-0 10 KO’s) going up against the untested Philadelphian Malik Scott (35-0 12 KO’s). The co-feature would be a fight to raise up the house as the “Pride of Huntington New York” Chris Algieri (15-0 7 KO’s) faced the New Jersey based Dominican fighter Jose “Mangu” Peralta (10-1 6 KO’s) in a junior-welterweight battle. With the location at capacity and the fans anxious for the blood and sweat that’s synonymous with the sweet science, we check on the action from the undercard.

The first of the night was a welterweight bout between Long Island native Anthony Karperis (3-0 2 KO’s) versus Clairton, PA’s very own Justin Johnson (4-4-4 0 KO’s). The first round was a scary one not only for the fans but for Karperis who touched the canvas twice after being overwhelmed by Johnson, but he was able to recover and end the round with his senses intact. The crowd was anxious as the 2nd round started as Karperis who had swelling around his left eye, worked on the inside landing short shots on his taller foe as the fans cheered every punch he threw. After giving up the second round the rangy Pennsylvania fighter started using his jab again and timing his opponent with straight rights that had some success and nullified his forward movement, a solid round for Johnson. With Karperis both tired and desperate,  he would try for the last 3 minutes to fight on the inside and tie up Johnson, but the slick boxer would just turn his foe and land right hands along with a low blow that temporarily paused the action. After what were four brisk rounds of boxing the judges unanimously awarded Johnson the victory and giving the Hicksville fighter his first loss as the crowd applauded his effort.

In a competitive 6 round lightweight bout, Phildadelphia’s Karl “Dynamite” Dargan (11-0 6 KO’s) who is trained by Nazim Richardson, faced upset minded Ramesis “Payasito” Gil (8-5-5 5KO’s) who made the trip from Santo Domingo, Dominican Republic. The bell rang with the athletic Dargan looking to start aggressive behind a jab, but things didn’t quite work out as planned as “Payasito” landed an overhand right that forced an off balanced Dargan to touch the canvas with his right glove scoring a knock down. Despite the minor setback in the first round, “Dynamite” came back in the next two rounds behind a consistent jab while Gil looked to loop rights and lefts around his opponent’s guard to score another knockdown.

In the fourth round; Gil who was looking to get back on the score cards after being controlled for the second in third rounds, made the fight ugly by getting inside and trying to take the advantage away from the longer Dargan. In the last two rounds of the fight, Gil tried his best to make it close by coming in with wild shots as “Dynamite” retreated behind a jab and slick Philly style defense, he worked angles and pot shotted his foe but Gil found some success rocking him with a short left hook on the inside. As the closing seconds of the last round approached, Dargan cemented his win with a crisp right hand that backed up Gil which helped him earn a unanimous decision raising his record to 12-0.

The third bout of the evening was between two lightweights in a 4 rounder with the hometown favorite Alan Gotay (3-0 2 KO’s) battling Micah Branch (1-3-1 0 KO’s) from Cincinnati, OH. Gotay with the crowd behinds him looked to swarm Branch in the first round and buckled his knees with a solid straight right, but after settling down he worked behind a jab to dominate the opening round. In the second stanza, Gotay continued his aggressive ways and caught his man off balance landing a flurry on the inside to score a knock down, Branch was up on steady legs and back to shooting hooks off his jab while Gotay fought through to land his own left hands. The next two  rounds would feature action in the center of the ring with Gotay controlling the action and Branch trying to push the pace, the last minute of the fight was a war after the man from Ohio connected with some great looping right hand as the crowd rooted for their hometown fighter to get his opponent back. There were no questions about who won this bout as Gotay bumped his record up with another win earning a unanimous decision, as Branch falls to a deceptive 1-4-1.

Another bout on the Future Stars portion of the card brought in Issouf Kinda (15-0 5 KO’s) in a 140lb matchup against the game Arizona fighter Javier Loya (7-1 6 KO’s). The West African Kinda, who now calls Brooklyn home; came out of his corner looking to box and use his range. Loya who made the trip from Phoenix, tried to keep up with Kinda as he used the whole ring looking to land his own long range shots.

After a first round that was very close,  Kinda had other plans than just boxing and looked to put the game Loya on a two fight losing streak dropping his man with a hard looping right that turned his legs in to spaghetti. Loya was up at the count of 8 and the ref was tentative to let him up but he did. Seconds later the proud African fighter was all over his opponent and landed a barrage of unanswered blows as the referee jumped in to stop the fight; KO win for Issouf Kinda in just the 2nd round.

The next bout was a junior welterweight bout with a fighter in Jonathan “Lil Big Man” Cuba (6-4-1 4 KO’s) who was featured earlier in the week, as he attempted to put a loss on the record of Cletus” The Hebrew Hammer” Seldin. The bout exploded at the bell with both the fans and Seldin surprised by the lateral movement and amount of hard power shots thrown by the game “Lil Big Man”. As Seldin came forward with the crowd cheering “Hammer, Hammer!” , he dug in to his opponent with hard left hooks and right hooks to the body and head while Cuba timed him coming in with the occasional right uppercut. The end of the first round was marked with blood as a clash of heads from the aggressive fighters caused a gash on the forehead of the Dominican brawler.

Seldin came out to continue stalking Cuba, backing him up and trading in the pocket, one right hand seemed to push “The Hebrew Hammer” back a moment but he continued on his attack and opened a bad cut above Cuba’s left eye that had the doctor coming in to check on it. After being cleared to resume action the round ended with the tides turning and with the third round starting, Cuba rushed in to the middle of the ring looking to throw bombs. With his defense down and only feet away from the ropes, Seldin; with the whole crowd cheering on the Long Island favorite, unleashed a devastating right uppercut that left his man unconscious in only just the beginning of the third round. With the win Seldin proves to have a great amount of power along with a solid chin as he advances to 11-0 with his 8th consecutive stoppage win.