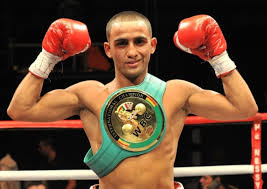 London (24 Sept) Sheffield’s super-bantamweight star Kid Galahad (Abdul-Bari Awad) has won the prestigious ‘Young Boxer of the Year’ award, which will be presented by the Boxing Writers’ Club at their annual dinner at The Savoy in London next month.

The 24-year-old has snared British, Commonwealth and European titles as a professional and secured the IBF World Youth belt on Saturday (September 20) when beating Adeilson Dos Santos via landslide decision at Ponds Forge Arena, live on Channel 5. The win took his professional record to 18-0 (9 KOs).

“This is a great honour for Kid Galahad and it’s richly deserved,” said promoter Mick Hennessy. “He has won British, Commonwealth and European titles in the space of three fights and has truly established himself as one of the very best super-bantamweights in the world. It’s now only a matter of time before he becomes a world champion.

“This award is also testament to the great job Channel 5 and MaxiNutrition have done with Kid Galahad. There are other top super-bantamweights in this country, of course, but, thanks to Channel 5, Galahad has been the one fighting regularly on terrestrial television. As such, his fights have been going out to a bigger audience. Channel 5 have backed him, they’ve believed in him and now everything is coming to fruition.

“It’s a victory for all of us. There are exciting times ahead for Kid Galahad.”

This year Galahad has beaten Brazilian Dos Santos, Australian Fred Mundraby and Spaniard Sergio Prado. Along the way, he has barely lost a round. At the end of this year he hopes to meet either Scott Quigg or Carl Frampton.

He said last week. “I’m fully confident I’ll fight for a world title, and I really hope I’ll fight either Scott Quigg or Carl Frampton. Either of them will do. I personally believe I’d beat them both on the same night.”