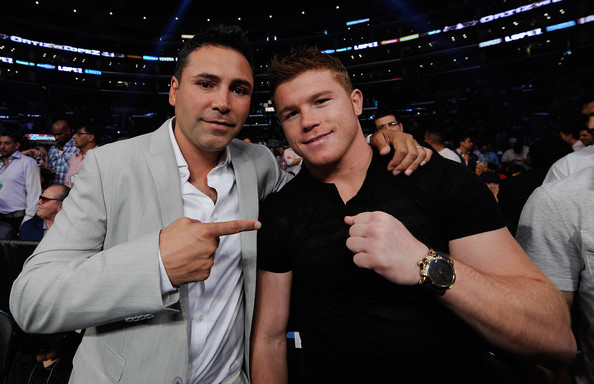 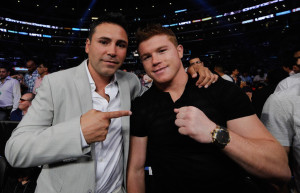 After the press conference where Oscar De La Hoya confirmed the big news that Saul ‘Canelo’ Alvarez is returning to HBO, ThaBoxingVoice.com had a chance to speak with the ‘Golden Boy’ himself. This historic deal not only means that Canelo is moving to HBO, Oscar De La Hoya’s company is making the move back to HBO too.
Oscar De La Hoya feels that there are many positive sides to this story. He elaborated, “I believe that the fact that Canelo decided to move back to HBO is a positive move for his career. He wants to make history and wants to fight the best. Me, as a promotor, I take orders and work them. I am happy to bring my fighter back to HBO.” But according to the promotor, the fans are the biggest winners today. “The fans win, that is the bottom line. Saul is looking to fight the very best and that is what we are going to see.”
Nothing is confirmed yet on the next opponent for Canelo’s next fight. The fight will likely take place on December 6. Possible venues are Staples Center, Minute Maid Park or the Alamaodome. Rumors suggest that Joshua Clottey will be the opponent, but Oscar De La Hoya wouldn’t confirm anything and stayed rather vaguely, “We have options. Canelo is coming of a string of really tough fights. We live in an era were fighters don’t even wanna take risks, he is the only fighter out there that wants to take risks.”
The Hall of Fame fighter and successful promotor concluded the interview by saying that he hopes that no doors will be ever closed on him again. He explained, “The way I see it. If I was a producer of TV series, I would pitch my series to CBS, NBC, Fox, etc. Nobody closes the door on you, because it would be bad for business. As a promotor, I have to look out for my fighter. And therefor, I hope no doors closes on us ever again.”
Tweet