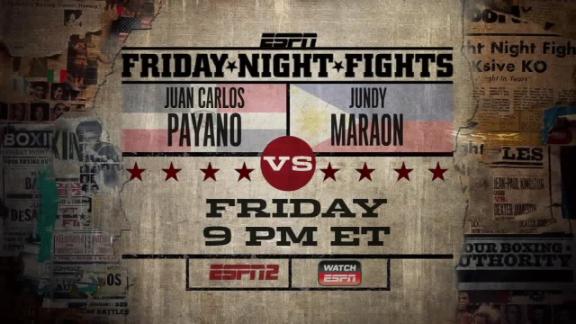 The June 14th edition of ESPN’s Friday Night Fight’s series was memorable for managing to be exciting and completely devoid of any controversy, something in which previous broadcasts has been fairly unsuccessful. Of the three fight card, at least two managed to deliver when it came to all-action types of performances and emphatic stoppages.

The first bout of the broadcast may have been the slowest. In a four round bout, welterweights Anthony Gangemi (4-0, 2 knockouts) and Anthony Prescott (1-2-1, 1 knockouts) engaged in a fight that wasn’t the prettiest, but fairly fun nonetheless. Although Gangemi’s superior size and talent was fairly apparent from the opening bell, Prescott did his best to make it a close fight.

With an attack that was aimed towards the head and body of Prescott, Gangemi was successful in constantly applying pressure against Prescott  while also landing the much more significant punches of the bout. Although Gangemi was the busier fighter, Prescott tried to make up for his shortcomings by throwing nothing but absolute bombs with every intention of ending the fight. Unfortunately, even when these punches managed to land Gangemi was able to shrug them off entirely. It’s this kind of rinse and repeat cycle that eventually led to Gangemi walking away with the decision victory on scores of (38-38), (40-36), and (39-37).

The co-main event of the evening was an 8-round junior featherweight bout that would eventually set the tone for the main event that followed. Jorge Diaz (17-2, 10 knockouts) took on hard punching Yenifel Vicente (25-1-2, 1 NC, 15 knockouts) in a bout that many had anticipated would be a type of showcase for Diaz. Instead it was a bout that featured great back and forth by both fighters before coming to a satisfying end.

In the early rounds, Diaz seemed keen to avoid getting into a fire-fight as he relied on a peppering jab to keep the uber aggressive Vicente at bay. Although tactically sound, this gameplan proved to be fairly useless as both fighters quickly found themselves engaged in the type of brawl that saw both fighters trading the types of concussive blows that would put many other fighters to sleep.

Although Vicente the better of these violent exchanges, Diaz finally seemed to be getting into the groove of things by the third round. With his mixing of jabs with power punches, Diaz seemed to finally be getting to the hard charging Vicente. After all, earlier in the round Vicente unleashed a vicious flurry of punches that led many to believe that he may have punched himself out. Unfortunately for Diaz, this proved to not be the case.

At the start of the fourth round, Vicente came forward in his usual aggressive manner. As Vicente charged forward, Diaz managed to land some solid jabs and power punches that seem to hurt Vicente. As Diaz charges forward to capitalize on the damage done, Vicente throws a short counter punch that drops Diaz. After surviving the ref’s count, Diaz was once again assaulted by Vicente and this forced the referee to step in and eventually call an end to the fight.

Much like the co-main event, the main event was a bout that featured fireworks from bell-to-bell. In the sole 10-round bout of the broadcast, bantamweights Juan Carlos Payano (14-0, 8 knockouts) and Jundy Maraon (15-1-1, 12 knockouts) took part in a bout that was relatively even before coming to a violent and sudden end.

The early rounds followed much of the same pattern. Payano would come out incredibly aggressive, thus causing fits for the fairly tentative Maraon. Of the two, Payano was the first to really mix up his offense, and this leads Payano to seemingly stun Maraon early and often in the bout. Things finally managed to turn around for Maraon after succesfully knocking down Payano with a two punch combination, followed by a body shot, which sent Payano crashing along the ropes.

Where one would normally think that Payano would become much more careful and calculated in his attack, he instead came forward as aggressive as ever in an attempt to get even for the knock down he suffered in the previous round. With his mix of brutal aggression and effective counter punching, Payano was managing to frustrate Maraon much like he was earlier in the fight. Still, Maraon managed to keep things close by continuing to attack the body of Payano and initiating a clinch whenever the blows got too intense.

In the seventh round, Payano came out especially aggressive and strings together a combination that staggers Maraon. Maraon stood his ground and attempts to counter punch from this point forward, but Payano follows up with another brutal combination that drops Maraon. With his inability to answer the ref’s count, Payano was awarded the thrilling victory.

Although the same can’t necessarily said for a young professional like Gangemi, fully expect the rest of the fighters, both winners and losers, to find their way back on future broadcasts after such exciting and fairly competitive performances. This was exactly the kind of night that Friday Night Fights needed, and now all one can hope for is that next weeks’ broadcast proves to be just as exciting.