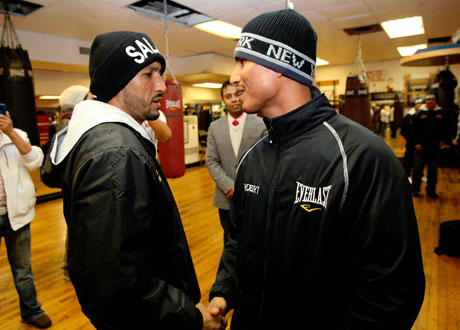 Bob Arum:  We have three really good fights on this card Saturday night.  New York City has a very intelligent boxing fan base.  You have to understand that when you put on a fight in New York City, you have to put a good card together for it to sell.

JUAN CARLOS BURGOS:  This is my second opportunity for a world title and I don’t know if this chance will ever come again.  I am dedicating this fight to my uncle (Victor Burgos).  Ten years ago my uncle won his world championship.  He won the title against a Puerto Rican and on Saturday night I can win a world title against a Puerto Rican also.
ROMAN MARTINEZ:  (Martinez arrived in a Carmelo Anthony #7 Knicks jersey).  I am wearing this jersey for ‘Melo because his father is Puerto Rican (his mom is African-American).  I am representing my country in this fight.  I think working the body is the biggest key for me in this fight.  I think that will be to my advantage because of how tall Burgos is.  I learned a lot in my last fight against (Miguel Jr) Beltran (split decision win on September 15, 2011).   After that fight I went right back to the gym and haven’t stopped training since.
MIKEY GARCIA:   People have been talking about this being the first big fight of the year and I’m glad to be a part of it.  Everyone expects to see a good fight and they want to see a good fight.  I am going to try and dictate the pace, but if I have to slug it out, I will.  He will probably try and come in and if he does, I’ll be landing punches.  He’ll find out that I have the power to hurt him.  I will use counter-punches and throw the jab.  Whatever it takes.  We will see round-by-round how I will fight.
ORLANDO SALIDO:  I come to fight.  I give it my all every round.  I want to give the fans a good fight but I know it will be a difficult fight.
* * Martinez and Garcia crossed paths in the gym and to everyone’s surprise, embraced and chatted for a few minutes.  What could they possibly be talking about?  “I just told him that we should go out there and put on a good show.  A show that people will talk about for ages,” said Garcia.  “He agreed.”

Crystina Poncher / Top Rank
ORLANDO “Siri” SALIDO will defend his World Boxing Organization (WBO) featherweight title against  undefeated No. 1 contender MIKEY GARCIA; undefeated World Boxing Association (WBA) / International Boxing Organization (IBO) middleweight champion GENNADY “GGG” GOLOVKIN will look to extend his reign into its third year against world-rated contender “King”GABRIEL ROSADO; and two-time WBO junior lightweight champion ROMAN “Rocky” MARTINEZ will put it all on the line when he goes mano a mano with No. 1 contender JUAN CARLOS “Mini” BURGOS.  All three fights will be televised live on HBO Boxing After Dark®, Saturday, January 19, beginning at 9:45 p.m. ET/PT.
These six warriors have a combined record of 170-18-3 (123 KOs) — a winning percentage of 89% and a victory by knockout ratio of 72%.
Promoted by Top Rank® and K2 Promotions, in association with Tecate and Madison Square Garden, remaining tickets, priced at $200, $100, $50 and $25, are currently available for purchase at the Madison Square Garden Box Office, all Ticketmaster outlets, Ticketmaster charge by phone (866-858-0008) and online at www.ticketmaster.com or www.thegarden.com
For fight updates go to www.toprank.com or www.hbo.com/boxing
Tweet