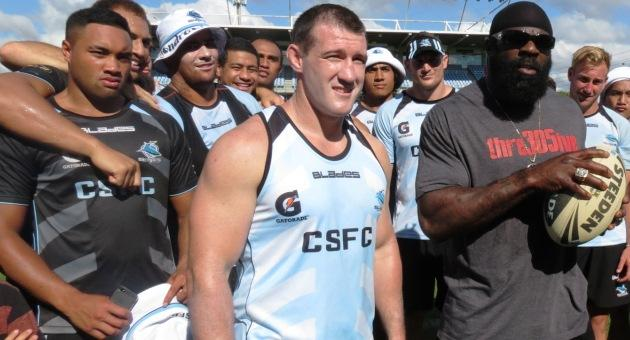 Global icon fighter Kimbo Slice, who’s promoted by Gary Shaw Productions, is less than a week away from his highly anticipated 4-round bout against QLD Heavyweight champion Shane Tilyard. The bout takes place at the Sydney Entertainment Centre, on Wednesday, January 30, as the co-feature on the undercard of Mundine vs. Geale II.

Earlier toady Kimbo recently spent time with the Cronulla-Sutherland Sharks, one of Australia’s professional Rugby league teams.  He watched the team train and afterwards posed with the players while answering questions from the media.

“I enjoyed watching the Sharks practice today.” said Kimbo Slice. “The whole team along with their coaches greeted me with open arms. They all seemed real excited about watching me fight live in their native land.  The all smiled when I said I’m here to do what I do and that’s knock somebody out.”

It was evident that Kimbo Slice’s popularity has reached a worldwide status as tons of Australian fans that were present mobbed the global sensation, once they got a glimpse of him.

“The fans out here in Australia are really cool.  It’s a good feeling to know that I have fans half way around the world and I really encourage them all to come see the fight live or watch it on Pay Per View.” stated Kimbo Slice.

“There is no doubt about it…I’m going to put on a great show for all my fans. Shane Tilyard is a tough guy, but he’s never been in the ring with a brawler like me.  I’m on another level.”

Gary Shaw believes Kimbo Slice’s mass appeal to connect with fans is unique and he expects those watching on PPV will get their money’s worth.

“Every time Kimbo Slice is about to fight the whole world waits in anticipation to see what he’s going to do against his opponent,” said Shaw. “One thing you can always count on is Kimbo going for the knockout.  He throws with bad intentions