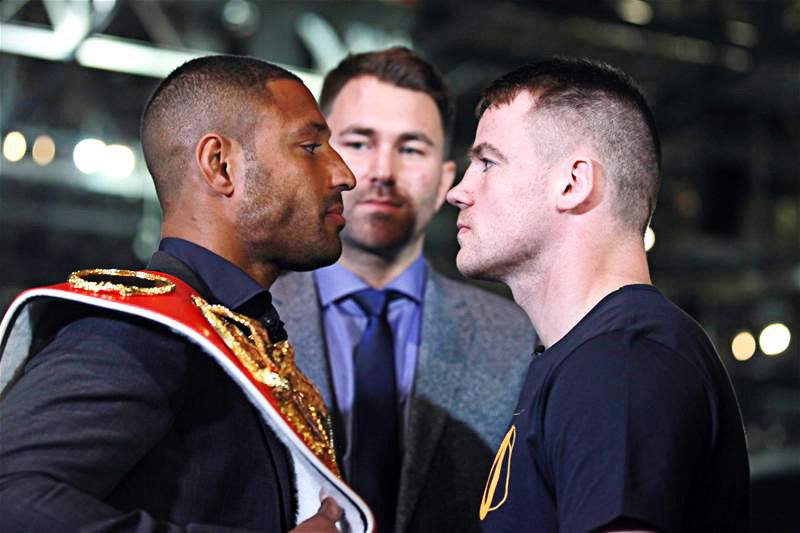 Frankie Gavin (22-1, 13 KO’s) was entering the final week of preparations for his first crack at a world title when he spoke with FightHype.com recently, and he cut a confident figure going into a high-profile match, in which he is seen by many as the underdog.

Gavin will top Matchroom Sports’s ‘Rule Britannia’ PPV card at the O2 Arena in London, England on May 30th, as he challenges the undefeated IBF welterweight champion of the world Kell Brook (34-0, 23 KO’s) over a scheduled twelve rounds.

So close to the most significant evening of his professional career, he appeared relaxed and ready for the task at hand as he answered questions seated on the ring apron after a public workout.

“This is what you dream of; world title fights. And now I’ve got it,” said Gavin.

Up to this point the Birmingham-born 29-year-old has not quite reached the heights in the paid ranks that seemed a sure thing coming off a stellar amateur career. He became England’s first ever World Amateur Champion in 2007 -running through a tough line-up that included Olympic champion Aleksei Tishchenko in the semi-finals- missing out on going to the 2008 Beijing Olympic games because of a failure to make weight after some political mishaps on approach to the tournament.

He was heavily tipped to medal in Beijing, but the fact that he didn’t make the cut effectively dismantled the springboard that would have launched him into a high-profile debut as a pro, with the cheque to match.

As it turned out, he signed with promoter Frank Warren and began his campaign to less fanfare than perhaps was expected, and warranted. In his time under Warren’s wing he racked up twenty-one wins against a single defeat at the experienced hands of Leonard Bundu last August; a fight in which Gavin showed his guts by scraping himself off the canvas after a body shot crippled him in sixth, and battling through a cut eye in the seventh. By the latter rounds he was running the show, but the knockdown was enough to take away his undefeated record.

That was his toughest assignment to date and if he performed to the same level each time out nobody would have anything negative to say. However, it has been against less lauded opposition that he gets the flak thrown his way. He has always been content to move and stay patient, flicking out the jab from the southpaw stance and waiting for the openings to appear. He is a deliberate operator, but has been criticised heavily in the past for not trying hard enough, a notion given credence by his turbulent relationship with the scales that has been an ongoing feature throughout his journey. He has never pulled out of a fight because he couldn’t make weight, but it has been said by several pundits that he could make light-welterweight if he tried harder.

Gavin insists that he needed an opportunity like this to bring the best out of him and he is feeling the benefits as a result.

“I think it’s just the fact that I’m more motivated really. I’ve got a little sparkle in my eye, I’ve really enjoyed it more. I’m always putting pressure on myself, worrying about what I’ve gotta do and that. I’m just gonna go out there and do what I do really and enjoy it. And come out with the win.”

Gavin never fights as if he has mental strains going on just beneath the surface. His style is quite languid. He leans forward with his hands low and throws punches from anywhere between his chest and waist. The more comfortable he gets, it seems the lower his starting position. He avoids shots by the narrowest of gaps by sliding backwards and bringing his upper body back at the same time, buying himself a few extra inches of room whether by instinct or design. He then picks his own punches, singles and doubles but never blistering combinations.

His methodology differs from Brook’s, who has carved out a ‘puncher’s’ reputation with puncturing blows that clearly disorientate the man on the receiving end. The Sheffield man has natural power emanating from his chiselled physique that is compounded by the accuracy he throws it with. Five of his last six opponents have been halted inside the distance and the only one to make it all the way was Shawn Porter; the man he dethroned in California in August of last year.

Based on this kind of form Brook felt it prudent to announce over Twitter that he wasn’t planning on this title defence lasting more than three rounds, a prediction Gavin obviously took issue with.

“I found it laughable really. It’s not like I’ve got a bad chin or anything, if he hits me I’m gonna take it and come back with my own. People talk about his KO power. He does knock people out but not sleeping or anything, and it’s not like I’m gonna be there to be walking on to these big shots. To hit me he’s gonna have to work for it, he’s not gonna be able to hit me at ease. I’m gonna be able to hit him as well, let’s see how he takes it cuz he doesn’t like getting hit either. We’ll see who take the best shot, we’ll see who gets hit the most on the night. Three rounds is laughable though.”

As he spoke, you could see how indignant that prediction made him feel. With each sentence, it was clear that Gavin holds himself in much higher regard than the champion professes to, and he made a very good case for himself as he continued.

“Technically I’m the best fighter Kell’s ever fought whether he admits it or not, without a doubt. Porter brought something different to the table; a bit rugged and raw, a bit crude. Technically I’m very well schooled and I pick my punches and let my shots off. I’m gonna be coming out to give him big problems and I’m sure I will.”

When you examine the top end of Brook’s resume, it is hard to argue with this assessment. Matthew Hatton, Carson Jones, Vyacheslav Senchenko and the aforementioned Shawn Porter are all high-level fighters, but none of them bring the same stylistic approach as Gavin, an approach steeped in the fundamentals of the amateur game. We do not know how Brook will deal with such a novel set of characteristics. Frustration is never too far away from a fighter who is struggling to find the target and getting pecked away at.

Conversely, Gavin has never faced anybody who brings a skill set comparable to Brook’s — the impeccable timing, the power, and the dead-eye accuracy — and it could prove to be a challenge. It could even be a case of Brook’s sheer physicality getting him halfway to the finish line. He is bursting at the seams making the 147 lb. limit and primed for a move up to light-middleweight, whereas Gavin is one of the smaller welterweights around.

There are so many factors that make this an intriguing match-up, including that it came out of nowhere for Gavin in the absence of the much-anticipated Kell Brook vs. Amir Khan bout that may or may not ever happen. This is what must have been in the back of his mind when he signed with Matchroom Sports over the new year, so now he must make this unexpected opportunity count. He seemed primed for action.

“I’ve got respect for him but I’m not scared of him. Far from it.”

“We’re coming to have a proper fight, a tear-up, we’ll see what happens,” Gavin added.