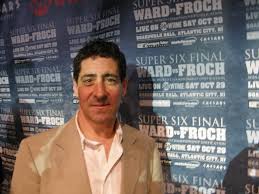 The news dropped Friday, a Bernard Hopkins-Sergey Kovalev fight should Kovalev defeat his opponent Blake Caparrello. He did just that and for his side, Bernard Hopkins showed up to Atlantic City as well to see his next opponent and started to sell the fight, not only talking with reporters for a good half hour but doing a post-fight interview alongside Sergey Kovalev with HBO’s Max Kellerman.

Rewind to last March, HBO dropped industry shattering news, saying they would no longer work with Golden Boy after Floyd Mayweather struck a very lucrative deal with rival Showtime. Oddly enough, Bernard Hopkins was the last Golden Boy fighter to appear on HBO and now will be the first back on the network. How did we get here? How did this fight come about after it was seemingly known that it would be Bernard Hopkins fighting Adonis Stevenson after Stevenson took his talents to Showtime, thus killing any hopes of a Kovalev-Stevenson fight?

“The deal is done for fight, it’s unification,” Hershman told ThaBoxingVoice.com “It came together very quickly. Both sides jumped on it. It was worked out properly, quickly and couldn’t be more excited.”

It was obvious when the Oscar De La Hoya took back control of Golden Boy Promotions; changes were going to be made. A lot of people were let go, a mending of a relationship with Bob Arum, but being back on HBO after Schaefer and Co were working exclusively with Showtime is a game changer.

Hershman explained why Golden Boy was back on his network.

“We never said we would never work with them (Golden Boy) again,” explained the executive. “We just said it had to be on the terms in a way that we’re comfortable to work together. Obviously with the change in leadership there, It’s a new attitude about that. We’ve embraced it and they’ve embraced it. You know here we go. We’re doing a mega event right of out the box.

The big reason the fight is happening according to Hershman is not only because of De La Hoya being in charge of Golden Boy, but because all parties involved know that it’s a big fight and that made it easier to make.

Part of the deal according to some insiders was that Main Events had to drop their lawsuit against Golden Boy from the Stevenson-Kovalev fall out . While Main Events CEO Kathy Duva wouldn’t comment much on the lawsuit she said, It’s all being worked out in court,” added that, “Our opinion of Golden Boy has changed, it’s a lot different than what it was a few months ago.”

Who would have thought that a month ago we’d be back here? A Golden Boy fighter back on HBO, my how things changed.