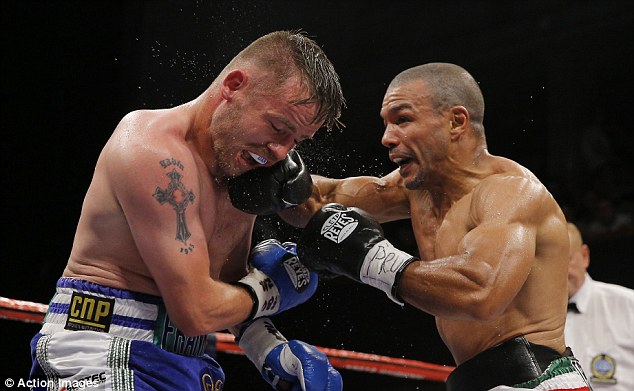 We didn’t expect to see Gavin curled up within the center of a scene such as this, not before the spoils of world domination had been dished out for him. What a body shot. Boxing is a humbling sport, for the participant and it should also be so, for the viewer. We were reminded of this Friday night.

Whichever way this is sliced or diced, presented with the prettiest arranged salad, the truth still sits dead in the middle of the plate like a cooked pigs head. What happened to Gavin shouldn’t have occurred. Myself? I explained to any who would listen, that this would be Gavin’s most challenging fight, one he would struggle with. I expected him to scrape by with a MD. I broke down my reasons for this in an uploaded video on YouTube several days before the fight. It still failed to cushion the impact of that shot, and the subsequent realisation that as good as Gavin is, he’s probably still not as good as we hoped, at the moment.

The switch hitting from Bundu in round one is defined and interesting, high energy; heavy volume of punches fired off from Bundu although not many catching Gavin clean. Feel out round as the cogs within the meat of Gavins head grind, as he attempts to read what’s in front of him. Gavin touches the body a little in the 2nd round, as Bundu begins to present a frustrating short and squat target that Frankie can’t time as well as he’d like. Bundu is also using a lot of head movement and feints, just to muddy the pool for Gavin a little further.

Rounds 3 and 4 are competitive; selected displays of beautiful Boxing from Gavin, opposed by intense flurries of punches from Bundu; very competitive. A little slither of space parts both fighters regarding the skill differential in the 5th. Gavin is the only one to really land much out of the two, in particular a biting right uppercut released to perfection as he moves out of range; sweet.

The dynamic shift occurs, it was this…a delayed reaction, a solid shot to the kidney of Gavin, causes him to drop to the ground in total submission to the pain. The right timing, the right placement, Gavin collapses. An overly generous referee allows Gavin who barely makes the count, a few desperately sought precious additional seconds. It was a play so suspect, even Bundu cracked a smile as he watched the “gum shield show” in first person. He attempted to apply additional layers of damage upon an unsteady Gavin’s frame, until the bell lifted the brummie man from a mid round loss and plonked him safely on his stool.

This didn’t encourage a humble retort from Bundu for the 7th, he comes out with the same intensity. In return, Gavin’s attempting to offer an illusion of a fighter who’s on some kind of equal competitive level, while his internal organs still reverberate from that body shot which floored him.

The next round and Bundu appreciates the exchange he’s had to give for the sustained work. The man from Sierra Leone decreases in punch volume a little and paces his punches, thus allowing Gavin to recover some of his previous game and range. Bundu still exploding with good bunches of shots although the work is sporadic and less accurate now, which is shaving the fight a little closer, on my card at least.

With the sole result of piercing any bottled ambition Gavin acquired from the previous round, in this 9th it’s a good clear round for Bundu, Frankie still in pain and of course, less willing to open up to take the fight to Bundu. The perfect invitation for Bundu to get the higher number scribbled on his side of the judges scorecards. 10 & 11 they both share alternatively, both men aware the result is far from chipped into stone.

It’s a sensible display of patience and clean technique from Gavin in the 12th, as Bundu later it’s revealed is apparently gripped by leg cramps. He has next to nothing to offer for the last three minutes, ending the fight with a clear round to Gavin…who ultimately loses the fight by split decision…a devastating inappropriately placed road block (no disrespect to Leonard) to collide head on clean with the amateur champion.

So we regroup; a despondent Gavin patronises no one as he speaks with IFLTV with an endearing honesty and almost innocence, his features appearing younger in defeat. In short, Bundu was the better man, my scorecard sits with Gavin in the clear by one point, which is of course, too close, even at home, especially when you allow Bundu to out work you on the ropes to the degree Gavin did.

Warren desperately held on to the proposition of a second meeting, almost negotiating prices with a fresh out the ring, sweating Bundu in the post fight interview! Bundu references his advanced aged for a boxer (nearly 40) and his aspirations toward world straps and honors; explaining he will only do the rematch “for a lot of money” rightly so.

Probably for the best, another defeat, to the same man, in his next fight could be the catalyst to detonate the remaining desire within Gavin, who already considered quitting Boxing that very same night in his dressing room.

He will probably return, he will probably fight Bundu in his next fight, as Warren will throw the bank at the Champ, add to that the pride of Gavin, who decided against a post fight interview. This all will coalesce toward a very exciting return match. Frankie wants to erase that loss, the concern being he picks up an additional one to go with his first if he fights Bundu next. Which is a situation I’m not sure Gavin could deal with upstairs.

We wait and see if we can stoke that same excitement for the potential that Gavin houses, again. Oh and congrats to Bundu, who wasn’t even aware he was fighting for the commonwealth belt as well! Legend.