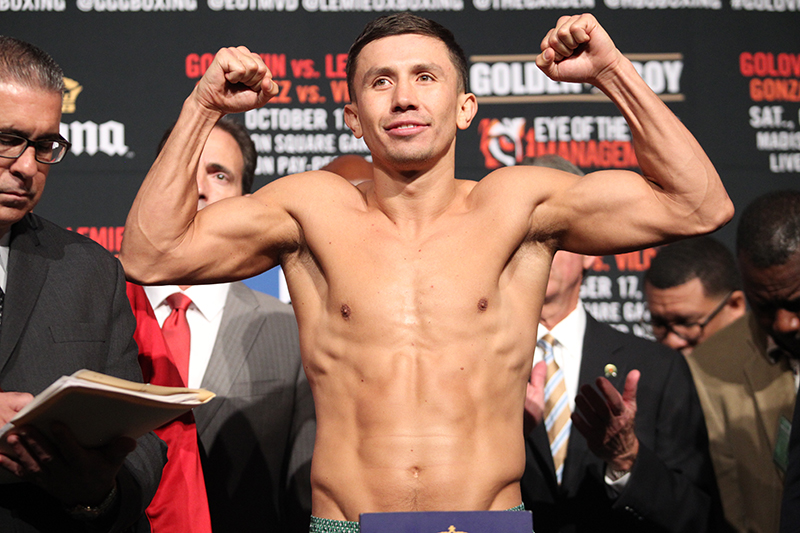 OVER 10,000 TICKETS SOLD!!
$30 Seats Already Sold Out!!
Los Angeles, CA (March 10, 2016) Boxing Superstar, Unified Middleweight World Champion Gennady “GGG” Golovkin and Consensus #1 Pound-for-Pound Fighter and WBC Flyweight World Champion Roman “Chocolatito” Gonzalez are once again proving to be the hottest ticket in boxing as over 10,000 tickets have already been purchased for UNDEFEATED, set for Saturday, April 23 at The Fabulous Forum.
“Tickets have been selling fast since we put them on sale less than a month ago and we are on pace to have another complete sell out,” said Tom Loeffler. “Coming off a sold-out Madison Square Garden on October 17 with over 20,000 boxing fans, Gennady is demonstrating once again his ability to headline a sold out event.”
“All of the ticket prices are selling fast with our $30 seats already sold out and we strongly encourage fans to purchase their tickets quickly.”
This is Golovkin’s second fight at The Fabulous Forum and tickets are selling at a much faster pace for this promotion than they did for his debut at the iconic venue on May 16, 2015 when 12,732 were in attendance.
Remaining tickets for the April 23rd event can be purchased through Ticketmaster (Ticketmaster.com, 1-800-745-3000) and the Forum Box Office.
_____________________________
Boxing Superstar and Undefeated, Unified World Middleweight Champion Golovkin, 34-0 (31KO’s) will defend his titles against Undefeated Mandatory Challenger Dominic Wade, 18-0 (12KO’s) in the main event at UNDEFEATED.
Co-featured will be Consensus #1 Pound-For-Pound Fighter and WBC Flyweight World Champion Roman “Chocolatito” Gonzalez, 44-0 (38KO’s) battling World Ranked Contender McWilliams Arroyo, 16-2 (14KO’s) of Puerto Rico.
Both bouts will be televised Live on HBO World Championship Boxing® beginning at 10:00 p.m. ET/PT.
Tweet