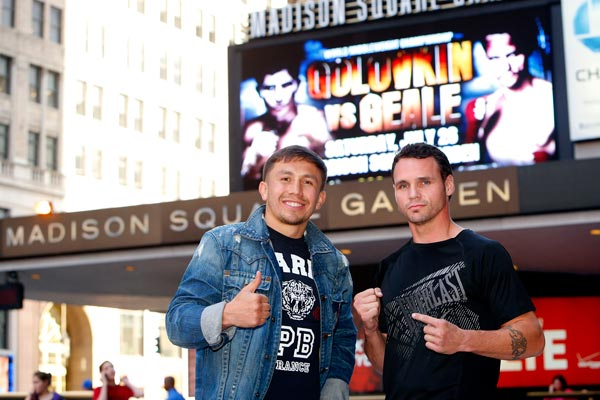 This Saturday, HBO Boxing returns to the city that doesn’t sleep, New York City, as WBO and WBA “Super” World Middleweight Champion, Gennady “GGG” Golovkin, with square off against Daniel “Real Deal” Geale, in Madison Square Garden. This is a fight that looked like it was supposed to happen in April, but Geale said the date didn’t fit him and Golovkin refused to budge on the date. The opponent was then rumored to be Andy Lee, but ultimately the fight date was canceled for Golovkin altogether because of personal reasons.

If you haven’t seen Gennady Golovkin fight as of yet, then you’re completely missing out on the show. He will be entering the ring with a 29-0 record with 26 stoppages. He only had one opponent last past the 8th round in his career. The 32 year old now hits the big stage as this fight will not be in the Theater part of the MSG like his previous fights there. This will be in the arena area in which the big names step into the ring with minimum 6000, 8000, 10000+ people in the crowd.

The man known as GGG does not have the greatest resume, but he has defeated Matthew Macklin with a crushing body punch in 3 rounds. He also knocked down Gregorz Proksa 3 times in a dominating victory over him in 5 rounds. And on a night Golovkin wasn’t 100% he punished, bloodied, and bludgeoned the face of Gabriel Rosado for 7 rounds until their corner through in the towel. Now Golovkin will be facing his stiffest opponent yet in Geale, a man who himself has been a world champion in his own right.

Daniel Geale will be stepping in to the ring with an impressive 30-2 record with 16 stoppages. His best win was 2 years ago against Felix Sturm, a fighter who it has been said that previously “ducked” Golovkin. Some of his other better opponents were 2 fights against Anthony Mundine, 4 years apart, with Geale winning the 2nd one and a win against Sebastian Sylvester. His last big fight was a lost to Darren Barker in Atlantic City last year. Geale is hoping that at age 33, he has not peaked and still has a lot of big future fights ahead of him.

Both of these fighters are about the same height, same weight, no visual advantages by either side, but if you have seen Golovkin fight, you know how hard he hits. In the word of Freddie Roach, “He hits like a (expletive) mule.” Golovkin has turned sparring partner’s forearms black and blue just by them blocking his blows. I think that eventually wears down Geale and ends this fight before the distance. So with all of that said, my pick is Golovkin by stoppage in the 7th. His combination of relentless pressure, mixed in with his solid technical skills and immense power will be too much for Geale.

This is 1 of those fights that will test Golovkin in 2 ways. First, Geale is on a higher level than anyone he has previously faced. A win here could line him up for a possible showdown with either Canelo Alvarez or Miguel Cotto at some point next year. Secondly, this will test Golovkin’s marketability. Having a fight in the arena part of MSG is a big step. If Golovkin, a man from Kazakhstan, not America, can go in to MSG and sell 8k tickets or more, it will prove his star power and give his promotional team some extra ammo when negotiating with other fighters. So as I said near the beginning of this article, if you’ve never seen Gennady Golovkin fight yet, it’s time to tune on Saturday, and enjoy the fight.