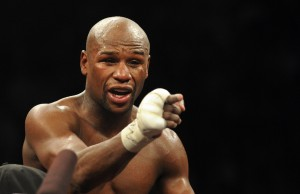 The psychological toughness of a fighter is of the utmost importance when entering a fight. As many fighters on the world class level will tell you, it is the one aspect of the game that separates the really good from the truly great. In the video, current unified 2 division lineal world champion, and number 1 pound for pound fighter in boxing Floyd Mayweather Jr. provides some very interesting insight on some of the nuances of how he mentally approaches the game.

One of the more interesting things Mayweather mentions is his patience in the ring. Floyd mentions an example of how early in his career enduring the boredom of long flights to places such as Germany, and Russia helped teach him to have the patience he now uses to deconstruct his opponents in the ring. He goes on to explain how while being patient in the ring,  he can see everything happening and how he uses the things he sees to deliberately and systematically dismantle his opponent en route to victory. “This is chess not checkers,” he adds, “Every move I make is calculated. Not just in the ring but in life period.”

When asked if he believes Maidana can fight strategically any better this time than he did in their last fight Floyd says, “Absolutely not” and attributes this to his own ability to make adjustments and maintain mental focus regardless of what’s going on around him.

He explains this more specifically by juxtaposing his mental edge in boxing to that of the effect crowds and certain environments can have in other sports. He mentions and explains how outside influences such as pressure from the crowd, trash talk from Robert Garcia, etc. do not effect his performance. Check out the video to see all of the very interesting thoughts regarding the championship mindset from the number one fighter in boxing today.