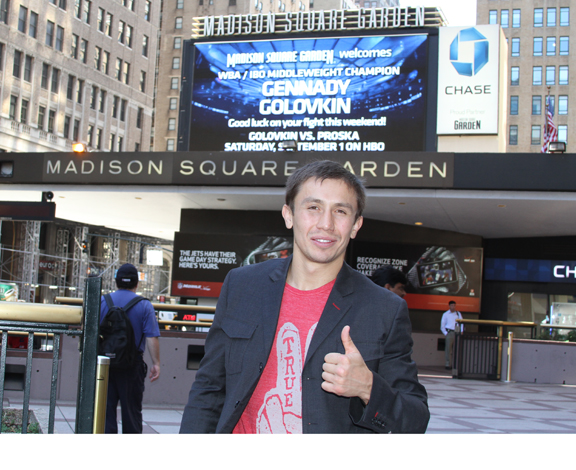 Gennady Golovkin has stormed onto the scene in both ratings and filling up smaller casino arenas and ballrooms since he arrived on our shores in September of 2012. He took on Gregorz Proska and stopped him in 5 rounds at the Turning Store Resort and Casino in front of a modest crowd in where most of the fans were there to see Sergey Dzinzurik.

He then took his show to New York where he was the co-main event on the Garcia-Salido card in January of 2013. The smaller theatre at Madison Square Garden can be scaled anywhere from 3000-5000 had an attendance number of 4,131. However, a good number of the crowd exited the arena after the Golovkin-Rosado bout where he bloodied a tough Rosado en route to a stoppage victory.

Golovkin fought overseas before returning to Connecticut to take on Matthew Macklin in another casino venue that is scaled to hold 3,000 and drew about 2,211. In that fight he ended Macklin with a vicious body shot in the third round

He made another visit to the very same MSG Theatre as the main event against Curtis Stevens from Brooklyn. He again stopped a very game Stevens in the 8th round in front of a crowd 4,611.

One thing was clear, casino ballrooms and smaller arenas could no longer hold Golovkin.

Enter in this Saturday’s fight with Daniel Geale; Golovkin makes his long anticipated return to the HBO screen in what is considered his toughest test to date.

Golovkin has already conquered all of the opponents in front of him. He has proven to be a ratings success as he’s improved from his 685,000 viewer debut to being one of the highest rated HBO main events last year against Stevens by the total of 1.4 million viewers. He hasn’t been on the HBO screen this year so a big number should be expected again.

But in essence his true test doesn’t stand on the opposite corner in Daniel Geale; his true test is the building of Madison Square Garden itself.

No longer is Golovkin a tenant of the Theatre, he now enters the fold of the big building where The Knicks and Rangers call home. He enters what was once known the Mecca of Boxing. He enters the second home of Miguel Cotto, who is the only boxer keeping that room relevant in terms of boxing, crowding it rabid Puerto Rican fans.

“It’s an honor,” stated Golovkin. “I’m the only fighter besides Miguel Cotto to main event here. I’m so happy to be back to Madison Square Garden, to be in the big arena and this time with such a great fighter.”

The arena is scaled for 11,000 fans according to K2 Promotions, Tom Loefler. About 3 weeks ago Loefler stated that there were about 7,000-8,000 tickets sold. Doing an interactive search on ticketmaster.com around that time, I saw that there were plenty of tickets available maybe to the tune of 4000 tickets as Loefler had stated. On the conference call this week Loefler didn’t give an exact number but stated the same tune, “Ticket sales are tracking well and with the co-feature, we expect a good crowd. It’s scaled right now for about 11,000 seats title total. If we get close to that number we’d be pleased.”

This week there was a press release sent out a few days ago giving fans the chance to buy discounted tickets this week for the event. When checking Ticket Master in regards to the interactive seating which shows you what exact seats are available in different sections, the option was no longer available. I checked a few different secondary marker websites like Stub Hub and Vivid Seats, Stub Hub showed 309 tickets available, while Vivid showed 246 tickets.

Now this by no means screams success or failure, but Golovkin is a must see TV and even a must see Broadway act as he will be in the play ‘Rocky” this week. Now he must answer a real question; is he now is he must see live attraction and appealing enough to draw a large crowd? He wants to be a major star here, one of the best middleweights of all time. His trainer Abel Sanchez even went on to state that Golovkin could be one of the greatest middleweights of all time. But he needs opponents as many of them have been reluctant to get in the ring with him.

This Saturday, Golovkin faces the garden with no large ethnic background here in the states behind him. He faces the test of his cross appeal stardom. Should he be successful in defeating Daniel Geale and gets a crowd near 10,000 or more, little by little he increases his leverage with the game’s bigger stars.

Loefler mentioned that he would only go up to 168 or down to 154 for a big fight and states that he, ‘definitely wants to fight Cotto, Alvarez, and Chavez. Any of those big names are for them to make compelling fights, moving up or down. Priority though would be to start unifying the middleweight titles.”

It starts Saturday to test if the gamble to move to the big arena is a major success or significant letdown to entice the top middleweights to get in the ring with him. Guys like Cotto, Alvarez, and Chavez Jr. can bluff at Golovkin right now but if he passes the MSG test, it may not be so easy, anymore