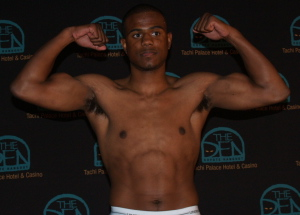 “I think Gennady [Golvokin] is going to destroy Danny Geale within seven rounds.” Paul Mendez (16-2-2 7KOs) said via text message upon reflecting upon his friend he worked with in Big Bear, CA. Mendez, who is currently listed as a top ten middleweight in the United States according to BoxRec.com. He has been out of action due to a shoulder injury that sidelined him after his fight with Santiago Perez at the beginning of the month in April. Last March, Mendez reflected upon how much he enjoyed training with Golovkin and competing against him in roadwork that most would find tedious.

“[Golvokin] is just an absolute monster his strength is something I’ve never felt before and he’s so technical.” Mendez further explained as he further the point that Geale will be in for a rough night this upcoming Saturday in New York City on HBO.

As for Mendez’s shoulder “…it’s absolutely great I am back in the ring sparring and ready to come out and perform.” Mendez explained. Mendez showed grit and toughness as he fought through an injury in the co-main event slot of a card in Brooks, CA, where both himself and Bruno Escalante, the cards two stars suffered injuries that forced them out of action for an extended period of time.

Yet Mendez stays in good spirits as he reflects “I love working out at the summit.” Mendez explained. The historic venue that is now being adorn with 24/7 video footage is now becoming a home away from home for Mendez, who has spent time in Big Bear, CA for his past three camps and looks to continue this. “I get to train with top boxers and Shane Mosley always gives me advice on what I do in the ring.” Mendez said with a smile as he reflected on the legendary fighter offering wisdom.

Mendez, who is currently in Las Vegas, NV working with Shane Mosley Jr. continues his pattern of getting good work though, no official return date is set. “[I am] aiming for September 18th on Fox Sports 1.” Mendez furthered. This card has been rumored to be taking place in San Francisco, CA and could possibly take place at the SF Armory in the mission district.

Mendez though keeps things simple as he is part of a camp that sets up nearly everything for him with the Garcia boxing family out of Salinas, CA. “As for my relationship with Max [Garcia], it’s great. Right now, it’s just me and him up in big bear so he cooks for me, trains me, and guides me on making the right decisions on my career. Max, Sam [Garcia] and my manager Kathy [Garcia] have truly been a blessing for me and my career.” Mendez signed a managerial pact with the Garcia’s in 2012 and has witnessed success as well as most importantly stayed very active upon until this past injury.