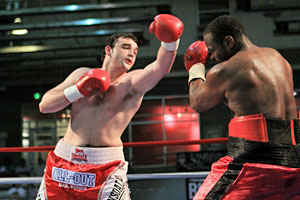 A naturally fluid boxer with superb skills, Kisner is also the youngest boxer in American history (17) to ever win a Men’s National Title in the Heavyweight Division. In 2009 he captured a Silver Medal at the US Men’s National Championships, which won him a position on the USA Men’s International team.

Kisner turned professional in 2010 and has only suffered two setbacks, a controversial draw in the opponent’s hometown and a split decision loss to fellow top prospect Junior Wright in Wright’s hometown of Chicago.

“I’m very happy to add Nick Kisner to the roster,” said Greg Cohen. “He’s a very skilled young man with a bright future in boxing. He’s had a loss and a draw, but both were fights he took in the other guy’s backyard. We’re going to make sure he gets the right fights to truly bring out what a great talent he is in the 200-lb division.”

Kisner’s first appearance under the GCP promotional banner will be announced soon.

Founder and CEO Greg Cohen has been involved with professional boxing in various capacities since the late 1980s, honing his craft and establishing himself as a shrewd international boxing businessman.

Distinguished by his ability to spot and develop raw talent, Cohen made headlines for his expert guidance of, among many others, former WBA Junior Middleweight Champion Austin “No Doubt” Trout, who Cohen helped guide from unknown New Mexico prospect to elite pay-per-view level superstar.

Greg Cohen Promotions has hosted world-class boxing events in the finest venues throughout the United States and the world and has also proudly provided talent and/or content for several television networks including HBO, Showtime, ESPN, NBC Sports Network, MSG and FOX Sports Net.