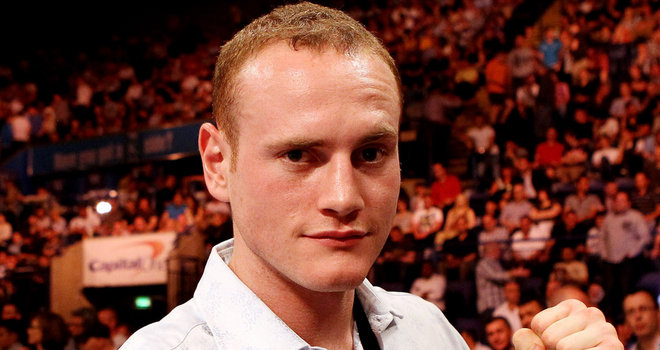 George Groves says that new trainer Paddy Fitzpatrick will bring the best out of him against Carl Froch as he takes the Sky Sports viewers into his training camp in George Groves – Behind the Ropes, tonight at 7pm on Sky Sports 1.

The challenger for Froch’s WBA and IBF World Super Middleweight titles split with long-time trainer Adam Booth ahead of Saturday’s clash at the sold-out Phones 4u Arena in Manchester, live on Sky Sports Box Office, and the Londoner explains the reasons behind the decision in the show.

“Adam was my trainer and manager from the start of my career to where I am now and I’ve had a good career,” said Groves. “I’ve had some up and downs and I’ve won titles but who knows what else I could have done elsewhere.

“I believe that all talented fighters need a trainer, need a good manager to keep them on the straight and narrow, that’s why I don’t have, that’s why I am not preparing for this fight on my own. I have still gone out and got the best team to work with so they can get the best out of you.

“You have to do that yourself the trainer can’t get up and do sprints for you, he can’t get in the gym and spar for you, it’s up to you to get in there and do it. So you know when you get through the ropes it’s just you, you’re ready. It is nice having someone in your corner who you trust and who you respect but sometimes you don’t have that and when you don’t it’s time to move on.

“Anyone who knows Paddy Fitzpatrick would describe him as a cool guy. He’s chilled, relaxed, I don’t think I have ever seen him animated or angry, then again I wouldn’t want to cross him at the same time because he does have a fuse if it ever gets blown.

“Paddy has calmness and an intellect that appeals to me because when he speaks he speaks very clearly. There is no waffle, there is no circus, there is no ego and I think that’s hard to come by in boxing. It comes down to his boxing know how, he is fierce, he explains stuff very clinically and it always makes sense. I think we’re pretty much on the same wavelength when it comes to how I would approach most fights but I have seen him in the gym with other fighters and seen how he changes and adapts his training style to suit them.

On the fight Groves believes he will be the first man to stop Froch, and said that he has plenty of tricks up his sleeve to make it happen.

“I know I will win this fight regardless,” said Groves. “There are many fights that I know I am going to win. Like James DeGale. I know what Carl’s strengths are and I know what his weaknesses are. There are many different ways that I would beat Carl and not just in general but on the night I will take it away from him in many, many different ways.

“Just like every fight I will go out and control the pace of the fight, I will control the distance during the fight and I will be hitting him frequently, accurately, powerfully and I am not sure what will break first his heart or his head but one will before the end of the fight.”

“I don’t keep a diary – I thought they were fourteen year old girls to write about boyfriends and homework?” said Groves. “We went out to Sheffield one week and he caught me with a right hand over the top, I was being lazy on the ropes, my knee touched down, I stood straight back up, carried on the round, carried on the rest of the spar. Two days later I came to his gym in Nottingham, sparred him took him apart.

“I got out of the ring and sat there staring at his trainer bemused. I think he was looking for a bit of confidence sparring and he didn’t get it that day, and then he went on and lost to Mikkel Kessler.

“I never read too much into sparring, because I don’t spar that great. If I’d dropped Carl Froch I never would have mentioned it, I wouldn’t have got up and said ‘yeah, let me send a text to my mum, let me write it in my diary at home’. Because what does it matter in sparring? It means nothing. I’m only going half-speed most of the time, if he does rely on that sparring he is in trouble, I’m a little better now and I’ll be a little bit better on Saturday night as well.”

George Groves – Behind the Ropes will air on Sky Sports 1 at 7pm tonight.