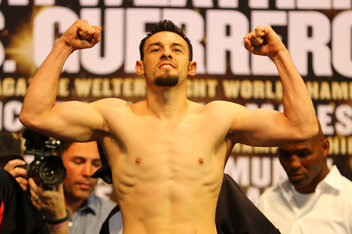 Robert Guerrero is back to his old ways of calling guys out. This time, “The Ghost” took to his twitter account and direct messaged Victor Ortiz on twitter.

“Man up Vic, let’s see who’s Cali’s best. Have Haymon call my manager. It’s [an] easy [fight] to make. Mosley is old and don’t you want a Floyd rematch? Come prove it, beat me,” Guerrero issued in his message.

Ortiz seemed not to have any issues with taking on the man that handled one of Ortiz’s toughest challenges a lot easier then Ortiz in Andre Berto.

“I’m up for it! I can do that for sure broham,” Ortiz replied.

Guerrero and Victor Ortiz have two common opponents, both men beat Andre Berto to land them Floyd Mayweather Jr. mega pay days and both lost badly to Mayweather Jr. A fight between these two can make for fan friendly television, let’s hope they put it together.