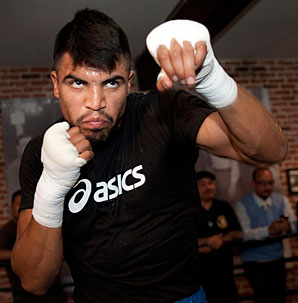 On June 8th it was announced that a possible fight between “Vicious” Victor Ortiz and “Sugar” Shane Mosley was in the works for sometime in August or September. Is there any interest in the fight? Fan’s don’t seem excited about it as of yet but the fight could be huge in the southern California area where both fighters reside. But why the lack of interest?

Victor Ortiz has been labeled a quitter for retiring twice in fights when things got tough. Ortiz has also proven himself to be a warrior and has put on excellent performances so this fight will be a crossroads for him and his future.

Fans were not excited to see Mosley return against Pablo Cesar Cano last month in which Mosley did not seem that bad or that old against the C class fighter.

What makes this fight interesting is that it is a must win for both fighters. Ortiz needs not just a victory but a clear victory to show that he is not finished as a fighter and a knockout of the older Mosley should do just enough to throw Ortiz’ name back in the mix for big fights. For Mosley, time is not on his side. A victory for him could lead to bigger things. Even though fans do not want to see him get fights, they still appreciate the talent and the career that Mosley had and will still watch to see if there if something special  that will transpire for the aged veteran.

A loss for either fighter could put an end to either career as far as interest in the fighter goes and premium network spots. Retirement is a possibility and could be looming for either should they lose.